Michela Fanini, born in Lucca on the 23rd of March in 1973, became National Road Race Champion of Italy in 1992 and won the Giro Donne in 1994. She was a rider with enormous potential, one who gave all the signs of becoming one of cycling's greatest stars had she not have been tragically killed when her Peugeot 205 hit a wall and rolled over on the 16th of October 1994. Her memory lives on, in the team S.C. Michela Fanini-Rox and in the name of this race.

The race consists of a prologue and four stages. In the case if Stages 2 and 4 the organisers have, for some reason, decided not to employ the standard technique of naming stages after the towns in which they start and end, using the names of the : Stage 1, Bottegone - Massa e Cozzile, actually ends in Montecatini Terme; Stage 3, Segromigno in Piano - Capannori, starts and finishes in Capannori. It's their race, I suppose.

The 2.HC classification designates this as being one of three Hors Categorie races, intended by the UCI to promote races awarded the status as being especially prestigious (the organisers of the Thuringen Rundfahrt declined the designation in favour of the standard 2.1, while the other 2.HC race, the Exergy Tour, is no longer held following sponsorship problems). As such, the points awarded to the winning riders are greater than in other races - first place in the General Classification receives 80 points, equal to two standard 2.2 events, second place receives 60 points, third place 45 points.

Please note: the official road book for the race appears to have several inaccuracies, both in the text and the diagrams. Routes and other features may therefore be different to those included here; please refer to the official site if in doubt.

Finally, whatever you do, make the most of and try to enjoy this race - it's the last Elite Women's stage race of 2013. 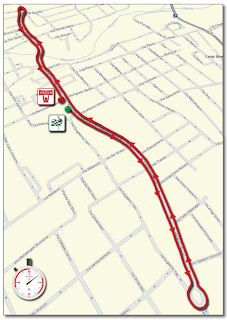 Prologue (11.09.2013; Campi Bisenzio, 2.22km)
With a short and flat parcours that, apart from the two turning points, is largely straight, the Prologue Individual Time Trial ought to see some blisteringly fast times. Look out for the TT specialists, who are going to be the ones to beat; but keep an eye on some of the climbers and sprinters too - there have been many climbers who were also good against the clock, and on a parcours like this a strong sprinter with good endurance could create surprise.

The climb on the Via Roma looks considerably bigger on the altitude profile supplied by the organisers than it actually is - if the profile was accurate, the climb would gain 25m in 0.15km at an average gradient of 16%. In fact, it gains only 5m in 1km; the average gradient is therefore 0.5% and the maximum, at the point where riders arrive at the bridge on the return journey, is only 3.2%.

Campi Bisenzio was the birthplace of Franco Ballerini, winner of the 1995 and 1998 editions of Paris-Roubaix. 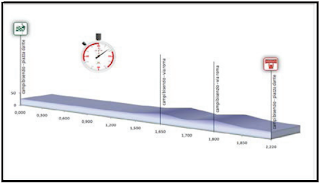 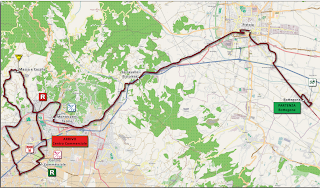 After yesterday's flat time trial, the Giro heads through rolling terrain for 33km to the hilly landscape around Montecatini Terme, where the riders face four laps of a local circuit featuring an ascent of the Piazza della Chiesa leading into the beautiful medieval village Massa e Cozzile, birthplace of Bruni Pasquini who won the Giro's brother race, the Giro di Toscana, in 1947.

While the climb is far from alpine with a maximum altitude of 223m, it gains the majority of that altitude in 3km; its average gradient of around 7.4% is sufficiently steep to earn it Category 2 status. The hill is climbed at 33.1km, 58.15km, 83.2km and 108.25km with GPM points being awarded each time. While there is plenty of opportunity for non-climbers to catch up in the last 14km from the final ascent to the finish, four ascents will have taken their toll and those riders that suffer on the climbs will be at a serious disadvantage to the climbers, making this a good stage for a small group of climbers - perhaps neo-pros and domestiques at this early point, before the GC contenders stamp their authority on the race - to form a break and go after a stage victory. Nevertheless, unless the climbers have managed to build up a big lead, they might find the sprinters get the last laugh after all - the final 3km are very flat and feature a couple of corners leading into a straight 500m to the finish. 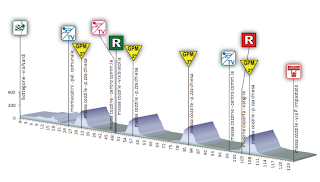 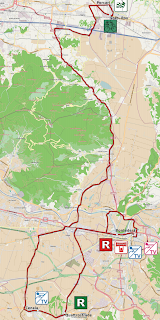 The first half of Stage 2 takes place on a parcours best described as rolling rather than hilly (though a couple of short ramps at 18km and 43km look steep enough to get knees aching, if only for a short time) while the second half, consisting of five laps of a 10.6km circuit at Pontedera is flat. There are no GPM points on offer for that reason, and so the climbers will probably sit back and conserve energy for Stage 3 (which has four Category 2 and two Category 1 ascents with GPM points aplenty) while the sprinters do their stuff and battle it out among themselves in the final 3km which, being flat with a corner  to mark the start of the last 200m, might have been laid out for no reason other than to encourage tactical bunch sprint finishes.

Pontedera is the birthplace of several professional cyclists including Fabiana Luperini, born there on the 14th of January 1974. Luperini, who turned professional in 1997, would become one of the most successful female cyclists of all time with victories in the Giro Donne and the now-defunct women's Tour de France - she won both in 1995, 1996 and 1997 - and is still racing, with the Faren-Kuota team, to this day. 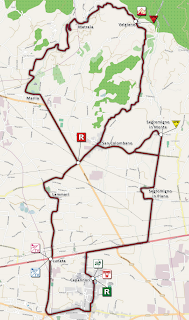 Yesterday's stage was one for the sprinters, today brings a route made for the climbers with no fewer than six categorised climbs - four rated Cat. 2 and two rated Cat. 1, making this an essential stage for any riders hoping to do well in the Mountains competition and a very important one for anyone hoping to win the General Classification.

The first 9km are flat (apart from a small climb 2km in), then the riders arrive at the first climb, Cat. 2 Segromigno in Monte. It's not a big climb, topping out at 100m above sea level, but the fact that it gains almost all of its height in a kilometre reveals why it's been given a high classification. What's more, the riders are going to climb it four times (11.3km, 28.2km, 45.1km, 62km) before turning off onto the second part of the parcours, where they face two ascents (84.2km, 112.4km) of the much higher and tougher Cat. 1 Valgiano climb - which rises to almost 400m in 9km with a very steep 2km section along the way.

The last 3km are flat with two corners in the last 1000m, making it ideal ground for a bunch sprint - though unless any one rider manages a solo break on Valgiano and stays away over the last 11.6km (which is exactly the sort of thing Marianne Vos does),  it's likely to be one fought by climbers and GC contenders rather than pure sprinters.

The two intermediate sprints and the Traguardo Volante Michela sprint prime take place in Lunata at the premises of Mercatino Fanini, the company owned by Michela's family. The sprints are at 38km and 71.8km, the prime is at 54.9km. Capannori is the birthplace of Mario Cipollini, who was often listed as the most successful sprinter in cycling history until the rise of Mark Cavendish. 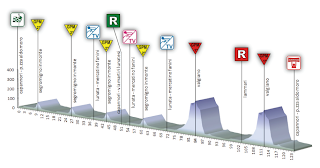 With two Cat. 3 climbs offering the only GPM points today, we'll see either a hotly-contested battle for the Mountains classification or a total lack of interest among the classification contenders - if there are only a few points between the riders at the top of the classification it'll be the former, if one rider led over the bigger climbs on yesterday's parcours then she'll have found an insurmountable lead and it'll be the latter.

The competition between the General Classification leaders is almost certain to be far stiffer - those categorised climbs, along with the uncategorised ones around 30km from the start, are just enough to give a breakaway plenty of scope to steal victory from right under the noses of the race leaders, or for the race leader (or someone near to her in the GC) to get into a break and turn a victory into a definitive, glorious one. There's still plenty of room for the climbers and sprinters to duke it out, too: while the climbs will give the climbers an advantage up until the summit of the second Cat. 2, the long and steep descent on the other side, with only 5.1km left to the finish line, puts them at a disadvantage and favours the bigger, heavier riders who can retain more effective control over their bikes at high speed. Then there's the finish itself: flat throughout the last 3km with a corner approximately 100m from the line, there'll be a fast and furious sprint if nobody's stayed away and the riders approach in a bunch.

The Memorial Michela Fanini has an unusually high number of classification leader jerseys, including two - awarded to the "most generous" rider (usually the most hard-working domestique) and the "most elegant" rider (awarded to the rider judged to have the best bike-handling skills) - that are unique to this race and were presumably invented to make more places to put sponsor's names, which is a practical enough reason.

Starters
A definitive starters and team roster list has not yet been published and it's probably safe to assume that this one is very provisional. Check Women Cycling Fever for regular updates.

Following the race
It has to be said that the Giro's organisers haven't got the greatest website ever seen on the Internet. That's not entirely their fault - few women's races have the budget to employ hotshot web developers, as seen with races like the Tour de France - but in this case it really wouldn't be a bad idea to try to improve matters (how about offering a VIP, access-all-areas pass for next year's race to anyone willing to tidy things up for free? There must be a few fans out there capable of doing it), because while the determined fact-hound will eventually get the information they're after, more casual visitors will quickly give up.

Hitec Products-UCK and Boels-Dolmans are both racing, which means one of the best ways to follow the race is by following Karl Lima and Richie Steege on Twitter. Lima is the manager of Hitec, Steege is the mechanic of Boels-Dolmans; both of them know the sport inside-out and provide regular updates on the progress of their own teams and their rivals in all the races they attend.
Posted by john_orbea at 17:22