Only the Dutch could ever have come up with a name such as the one this race bears. In fact, it's not really a name as such, but a description - "Rabobank-sponsored tour of seven villages in Aalburg" - and an accurate one at that, because a tour (sponsored by Rabobank) of seven villages in Aalburg is precisely what it is. One of those villages, incidentally, is Meeuwen; the most famous resident of which is a certain Marianne Vos, who has won four of the six editions of this race - 2007, 2009, 2010 and 2011 (Loes Markerink won in 2008, when Vos was third; Annemiek van Vleuten won for Rabo in 2012 when Vos was recovering from a broken collarbone sustained at the Valkenburg Hills Classic) - and has given her name to the recreational cycling route that follows the same parcours as the race and to which a new bench is added every time she wins a World Championship (so the local authority had better arrange a good supply of benches for the future). 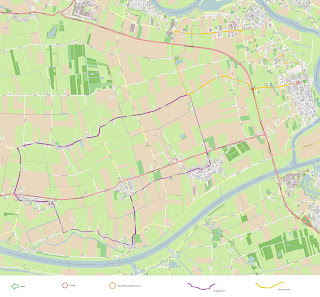 The Elite Women's race (there are other events too, more information below) consists of three laps around a 28.5km circuit (shown on the map in purple) and three around a 11.3km circuit (shown in orange), making a total distance of 121.2km. The parcours winds around the polders and is entirely flat; however, the wind blows in uninterrupted from the North Sea and can make it a difficult race.

Setting out from Bergstraat in Wijk en Aalburg, the riders first travel 1.3km west to arrive at a bridge over the N267 marking the end of the neutralised zone and beginning of the race proper on Veldstraat. Immediately after the bridge lies a sweeping right-hander bend, followed a little over 100m later by a sweeping left-hander between two farms. 470m beyond the second bend is a crossroads; they continue straight ahead for another 1.43km on Veldstraat to a left turn leading onto Lange Pad. Sheep sometimes graze along the verges here and, if the weather's been wet, the droppings they leave on the road can become slippery - as can be deduced from the damaged bollards. Lange Pad travels south, completely straight and very much prone to strong crosswinds, for 1.81km to a junction with the N283; the riders go around a roundabout to cross it and enter Genderin on the Kelderstraat passing between a petrol station and a car dealership on the way into the village.

390m after the N283 crossing is a fairly tight right turn on regular cobbles (actually bricks) between a convenience store and a branch of Rabobank. This leads onto Hoofdstraat, which will carry the race west for 775m to the western end of the village where it becomes narrower and changes its name to Nieuwe Steege. 1.86km further on the race arrives at Eethen, crossing a bridge just before the village and then, 450m later, negotiating a left turn onto Molensteeg. The entry into the corner is simple, the exit out of it is made more technical by the presence of a traffic island with bollards between the two carriageways, reducing space dramatically - if the peloton is still complete when it reaches it, it would be possible for a small group of riders at the front of the bunch to power away in an attempt to form a break at this point whilst the main body of riders are squeezing through.

Molensteeg leads south for 480m, then crosses a bridge before continuing for a further 630m to a sharp right-hand bend followed 60m later by a wider left. There is a cycleway running along the road, separated from it by a strip of grass, which would be an ideal place from which to watch the riders as they go through this section. After the left bend, the road becomes Kruisstraat and leads into Drongelen; after 289m on it the riders reach a brickwork cobbled crossroads and turn sharply right onto Gansoyen. The road is surfaced with herringbone pattern bricks and there are two mini-roundabouts which may be slippery in the wet in the first 210m, then 300m later the race leaves Drongelen behind and crosses another bridge where the road becomes Eindesestraat and heads back into open countryside. There are several bends in the 700m immediately after the bridge: the first four (right, left, right, right) and gentle; the fifth, a left, is much tighter. The remaining 1.08km of the section is much straighter and ends at a tight right turn onto Matersteeg heading north through an avenue of trees (providing welcome shade if the weather's as hot as it was in 2012). It then crosses a bridge and, 527m ahead, arrives at a junction where the riders turn left onto Moleneind to enter Meeuwen, home of Marianne Vos. 100m after the turn is a T-junction where another left leads onto Dorpstraat, carrying the race through the middle of the village and onward for 1.14km to a junction with the N283 - it's easy to see why Vos chooses to live here, being an attractive village with good transport links but sufficiently small and anonymous for someone as famous as she is to be left alone.

Crossing the N283 takes the race north along the Meeuwensesteeg, from where the Kasteel Meeuwen can be seen - it dates from the 19th Century and is surrounded by the moat that once encircled the proper castle that was demolished to make way for the present building. Meeuwensesteeg runs straight for 1.4km with, in places, some trees to offer a little protection from crosswinds, heading north to a bollarded right turn onto Hillsestraat leading into Babyloniënbroek. The road becomes Broeksestraat with two bends, a sweeping left and right, just beyond the village; there's another bridge 710m later, then the road becomes known as the Klaverplak and continues for 2.01km to a left turn leading onto Dodesteeg - the surroundings may seem familiar because the turn is only 60m west of the Veldstraat/Lange Pad junction the riders used earlier on. The corner isn't technical, but Dodesteeg is narrow enough to cause the peloton to have to change shape in order to fit onto it, creating another opportunity for a break; last year the trees on the left of the road blocked the wind and reflected the afternoon sun onto the road, making the 740m section leading to the crossroads unbearably hot and leading to several abandons. After the crossroads the road becomes the Zwaansheuvel; another crossroads lies 466m ahead and becomes Duizendmorgen; 376m after that it crosses a bridge spanning the N267 before continuing for 387m to a third crossroads where the riders turn right onto what is at first Middenweg before becoming Veensesteeg half a kilometre ahead.

2.02km from the crossroads is a T-junction in Veen where the riders turn right, traveling south for 60m along Schmitzstraat to a left turn onto Nieuwstraat; 320m ahead they turn right onto Rivelstraat and head south, crossing the 3km to the finish line point a few metres before passing by Korvertweg on the left. Rivelstraat bends gradually to the east and becomes Engelsestoof as it approaches Spijk and, at the next T-junction, the riders turn right onto Perzikstraat, following it for 239m before turning right to take De Kroon; 440m ahead the road forks and the riders keep right for Grote Kerkstraat heading back into Wijk en Aalburg, then turn right to continue on the same road at the next T-junction 313m ahead.  335m later, a right carries the race back onto Bergstraat where the riders continue for 237m, passing over the start line to reach the finish line at the junction with Anjelierstraat.

The long circuit described above is completed three times. Having passed over the finish line for a third time, the riders continue along Bergstraat and take the same route west along Veldstraat. At the junction with Lange Pad, they go straight ahead rather than turning left, arriving 60m later at the junction with Dodesteeg that featured in the long circuits; they turn right here and follow the same route via Veen and Spijk leading back into Wijk en Aalburg. This circuit will also be completed three times.

Other Events
In addition to the Elite Women's race, there are a total of nine Youth races suited to various categories and a race for handcyclists. The official website is still showing last year's programme; the 2013 should soon be listed here. Other festivities and events also take place; the programme should appear soon here.

How to follow the race
Karl Lima (manager of the Hitec Products-UCK team), Richie Steege (mechanic of Boels-Dolmans), Bart Hazen (photographer and journalist) and Anton Vos (journalist and brother of Marianne) did such an admirable job of providing accurate updates last year that it was possible to follow what was happening in the race on Twitter - a good thing, because as is so often the case with women's cycling there was no other coverage.