For the sixth stage race of the season (yes, six already!), the peloton stays within Europe and remains at a similar latitude to the Belgian and Dutch races of the last few weeks but heads to the east for one of only two non-National Championship visits to the Czech Republic. Now in its 27th edition, the race was - as you'd expect - dominated by East European and Russian riders in the early years with Angela Ranft (East Germany) winning in 1987 and 1989, Radka Kinclova (Czechoslovakia) in 1988 and 1990, Ildiko Paclova (Czechoslovakia) in 1991, Valentina Gerasimova (Russia) in 1992, Rasa Polikeviciute (Lithuania) in 1993 and Goulnara Fatkulina (Russia) in 1994.

Hanka Kupfernagel (born in East Germany before Reunification) won the first of three consecutive victories in 1995, then in 1998 the race was won by a rider from the West for the first time - the Swiss Marcia Vouets-Eicher. Kupfernagel won again in 1999 and 2000 and remains the most successful rider in this race to the present day, East German-born Judith Arndt won in 2001, 2005, 2006 and 2007, making her the second most successful rider; while another Swiss - Nicole Brändli - won in 2003 and 2004. Marianne Vos is of course among the winners, having recorded the fastest overall times in 2008 and again in 2010; Trixi Worrack, another rider born in East Germany before Reunification, won in 2009. Russians dominated in 2011 with Tatiana Antoshina, Natalia Boyarskaya and Svetlana Bobnenkova taking first, second and third, then in 2012 Evelyn Stevens became the first American winner. British riders have come third twice - Nicole Cooke in 2010 and Sharon Laws in 2012.

The race this year consists of a 2.2km individual time trial prologue, a 105.1km road race, a 26km individual time trial, a 58km road race, a 122,4km road race and a 100.2km road race on a circuit; further details can be found below. For those fans who like to get a really in-depth feel of what the riders face, the good news is that the Gracia Orlova organisers provide what are very possibly the best maps offered by any UCI race - highly detailed and interactive with zoom and other functions, they're comparable to large-scale British Ordnance Survey maps and, although in Czech, are easy to understand. You can find links to them here.

Prologue (24.04.2013)
A short individual time trial of only 2.2km, the prologue takes place in Havířov located in the east of the Republic, only 12km from the Polish border and less than 40km from Slovakia. There's not much in the way of climbing - that 3m ramp at the beginning of the altimetry profile turns out to be only a gentle rise on the road and shouldn't prevent fast starts, but the 12m climb over the final 1km to the finish line will sap the strength of riders who put too much into the first half.

The corners may turn out to be far more daunting. The first is a left into the car parking area; though not tight it's lined with trees on both sides and, if conditions are wet and windy, could be slippery. The second is the left back out of the car park; it also isn't tight, but the road surface isn't in great condition (this may have been improved by race day, of course). The third is the right-hand U-turn at the end of the road where the riders turn back the way they came.
Prologue Top Three
1 Ellen van Dijk (Specialized-Lululemon)
2 Lisa Brennauer (Specialised-Lululemon)
3 Alexandra Burchenkova (RusVelo)
Time splits and further details to be confirmed

Stage 1 (25.04.2013)
A 105.1km road race, Stage 1 takes in very different terrain to the Prologue with some big hills in the latter half - nothing like as big as the mountains of Stages 3 and 4, but taste of what lies ahead. After setting out from Dětmarovice the riders travel 18.1km south to Havirov, then swing east to encircle the lake to the south-east of the city. There are plenty of small climbs, some steep but rising no more than 50m or so, along this section.

At 45km, the peloton begins the day's big climb; ascending 260m in 23km gives an average gradient of only a little over 1% but the profile reveals numerous steeper sections, especially towards the highest point at around 510m above sea level - more daunting for the climbing specialists, who in many cases dislike descending, is the road on the other side: it drops 175m in 5km, average gradient -3.5% and steeper in places. Another climb of around 100m begins at 70km, this time with an average gradient of 3.3% - the profile reveals that this one too has steeper sections, with one looking to be something of a wall; the descent is, the climbers will be relieved to see, far less steep than the previous climb.
At the bottom of the descent, some 85km from the start, a flatter section with hills no higher than 50m begins and lasts for 17km. This is a good opportunity for climbers to even things up with any heavier riders who might have gained an advantage on those two descents and dangerous ground for sprinters, who'll need to expend energy they'd rather save for the last few kilometres where the day's final climb is waiting. Ascending  100m in 2km, the average gradient is 5% and makes it very likely that this stage will go to a climber - but not without a fight. 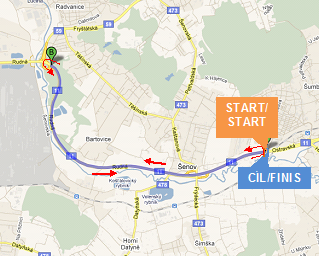 Taking place in the morning with the first riders starting out at 9:30, Stage 2 is a 26km "out-and-back" individual time trial - but one with a difference: the riders travel from Havirov to Ostava, return to Havirov and then repeat the journey, making it an "out-and-back-and-out-and-back" time trial.

Havirov, a new town built largely since the end of the Second World War to house mining workers and their families, is but for a few fields contiguous with neighbouring towns Senov, Radvanice a Bartovice and (much larger) Ostrava. The riders would never be able to tell from what they can see along the dual carriageway Route 11 road that forms the entirety of this stage, however, because due to a ridge of low hills running alongside the road very little other than an occasional and very typically Soviet-era concrete towerblock and a handful of modern industrial units little or nothing can be seen of the towns (to British fans, the similarity between this part of the Czech Republic and the more boring bits along the M25 motorway are striking).
What is obvious is that although this isn't a flat parcours - there are humps rather than hills, but a couple of sections reach a gradient near 6% - it's a fast one: the road is smooth and in very good condition with only a sweeping bend between the turning points. The lightning-quick time trial specialists are going to light this one up and set some blisteringly fast times; given the right weather conditions, we may see some of them complete the stage in around 30'.

Stage 3 (26.04.2013)
The time trial specialists had everything their own way this morning, but this afternoon the race is being handed over to the climbers - after 30km with only a couple of small hills, the second half of Stage 3 starts to climb and doesn't stop until it reaches finish line 800m above sea level. In other words, this is a stage for the climbers.

The race sets out once again from Orlova, this time beginning in the north of the town and heading north briefly before turning south-east towards the same lakes seen in Stage 1, then turns south at Stonava and south-west at Albrechtice. It passes Lakes Terlicko and Zermanice before progressing south via Dobra and Nosovice, where the terrain begins to climb more steeply; at Raskovice, with 12.4km to go, the race enters the mountains with the finish line located at the Visalaje ski resort. 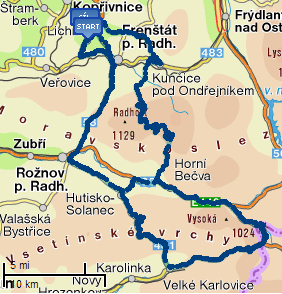 Like mountains? Then you'll like this stage because, over the course of its 120km, it features four of them - one reaching 1000m with a 6% gradient climb of 600m over 10km to get there, one reaching 800m with a 5.3% climb of 425m in 8km, one to 900m with another 6% climb over 4km before it flattens out slightly over the last kilometre to the summit and a final climb to 550m with a leg-busting 12.5% section over the last kiloemtre to the top. Then there's another very steep, short climb to the finish line, just in case anyone found the rest of the parcours a bit too easy.

Stage 5 (28.04.2013)
The Stage 5 route, winding through Orlova, is only 16.7km long and climbs no higher than 270m above sea level. However, that route must be completed six times, giving a total distance of 100.2km, and the altimetry profile reveals that some of the climbs are very steep indeed - it is very much not an easy day to finish off the race. With the last of these coming in the run-up to the finish line, the race is not likely to end with a bunch sprint.


Starters
Riders' numbers have not been published; it's likely that they'll be assigned in this order (since it corresponds with the organisers' start list), with Cramo Go:Green being assigned 1-6, S.C. Michela Fanini-ROX being assigned 10-15, RusVelo 20-25 and so on.

How to follow the race
TV coverage is, of course, not available, leaving Twitter looking the best bet once again.

Weather
It's looking as though the Gracia Orlova is going to treat the riders to the best weather they've seen in any European race so far this season with the temperature rising to 20C for the Prologue, 22C for Stage 1 and then as high as 25C all the way to the end of Stage 4 before Stage 5 drops to a cooler 17C - which will be welcome to some of the riders. With the exception of Saturday which might see some light showers, rain isn't forecast at any time during the race. Wind speeds for the Prologue and Stage 1 will be no greater than 8kph, having little effect on the race, while Stages 2 and 3 may experience gusts of up to 18kph from the south - with much of Stage 3 heading south, this may slow things down especially on the climb. Stage 4 will be much windier with gusts from the west as high as 26kph, while the cooler conditions during Stage 5 will bring a more comfortable north-easterly no stronger than 7kph.

As is always the case, the weather can change rapidly and without warning in mountainous regions, especially at altitude. Spectators at the race should ensure they have adequate clothing for all eventualities and be aware that it can be many degrees colder at the summit of a mountain than at sea level.
Posted by john_orbea at 13:06