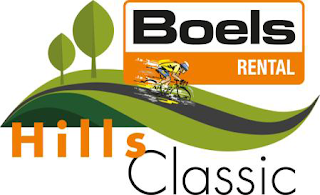 DIY and plant machinery rental companies aren't especially well known for their connections to the cycling world - in fact, they're not really well known for anything much and, upon finding themselves in need of the services of one, most people probably exhibit little brand loyalty and go to whichever one is closest or, if they have a choice, cheapest. So the fact that one such company - Boels, which has some 300 outlets in the Netherlands, Belgium and Luxembourg, as well as a few more in other nations - has decided to invest in women's cycling by sponsoring a team (Boels-Dolmans) and a selection of races (this one - hence the change from its previous name, the Valkenburg Hills Classic or, as it was before that, the Holland Hills Classic; the Holland Ladies' Tour, which was the Brainwash Ladies' Tour last year and will be the Boels Ladies' Tour this year; the Ronde van Drenthe) is a very promising indication that, in those countries at least, the sport is increasing in popularity. There'll be some cycling-obsessed executive who liked the idea in the head office at Sittard (where, incidentally, the race will both start and finish), but what really counts is that the bean-counters decided women's cycling offered a good enough chance of a return and gave the go-ahead.

So thank you, Boels; if I'm ever asked to recommend a plant hire firm by anyone from one of the countries in which you operate, I'll immediately recommend you. There, you see, other companies? Sponsoring women's cycling works. That's why Parkhotel Valkenburg, who are sponsoring the Mountains classification, is still involved too. Give it a try.

The Dutch have won most editions of this one with Mirjam Melchers-van Poppel taking the honours in first edition back in 2004. Anita Valen de Vries became the first Norwegian winner a year later and German Theresa Senff won in 2006. Dutch Marianne Vos of course gets her name onto the list and, having won in 2007 and 2009, she's the only rider to have won twice. Larissa Kleinman, another German, won in 2008 and the Belgian Grace Verbeke won in 2010. In 2011 the race wasn't held, it reappeared in 2012 when Vos was widely expected to take a third victory; however, an official motorbike on the parcours turned out to be too slow to get out of her path and caused a crash. Completing the race in very obvious pain, she was "only" able to manage second place with the same time as the winner, her team mate Annemiek van Vleuten; x-rays later revealed Vos had fractured her collarbone.

Parcours
Neither a map nor altimetry has yet been made available; however, since we know that the race is 120km long, where it starts and finishes and that it will in all likelihood pay a visit to Valkenburg and the Cauberg, it doesn't seem implausible that the riders will face either three laps around a circuit of approximately 40km or four around one of 30km, beginning at Sittard before heading south to Valkenburg, up and over Cauberg and then north back to Sittard again. A good 40km route would be easy to create, going Sittard-Munstergeleen-Puth-Schinnen-Hegge-Nuth-Hulsberg-Emmaberg-Valkenburg/Cauberg-Broekhem-Groot Haasdal-Schimmert-SBeek-Sittard; or vice-versa. Two possible routes are shown below, the official map will be added here as soon as it becomes available.

How To Follow The Race
In years gone by, the Holland Hills stood out among Dutch races in being really rather difficult to follow with little information on the official website, virtually no coverage elsewhere even days after the event and nothing at all on Twitter other than an occasional snippet from a fan at the race. Boels have set up a brand spanking new website; since their commercial webpages are clear, concise and very informative, this is hopefully a sign that things will change this year.

Hitec-UCK manager Karl Lima, Boels-Dolmans mechanic Richie Steege (being from Beek, Richie will be good for all sorts of info) and journalists Bart Hazen and Anton Vos are all, as always, the safest bets for accurate Twitter updates.