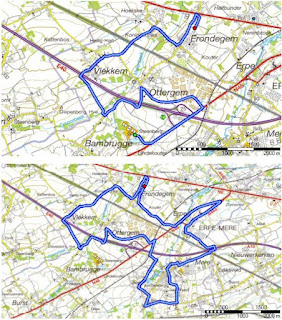 
One small loop of 9km, one 38.5km loop from Erondegem to Bambrugge and eight laps of a 9.3km circuit starting and ending at Erondegem, the total distance being 121.9km. The event formed part of the Lotto Cycling Cup.

With a rolling (rather than hilly) parcours and two 20m climbs in the final 1.5km (see details below), this was a race that could go to almost any rider rather than to a sprinter, as at first seemed to be the case. It was also a parcours that might favour a breakaway, especially as one that lasted to the end would have the advantage of being able to sprint to the finish line without the chasers'/peloton's knowledge once around the last right-hand corner and into the final 300m.

The riders appeared rather reluctant due to rain shortly after the race began, although an average speed of 41kph in the first hour showed that things were ticking over; however, the combination of slippery conditions and high speed proved dangerous - numerous crashes saw two riders taken to hospital. Emma Mackie of Abus Nutrixxion launched the first attack one hour and ten minutes into the race, rapidly gaining a 10" and then losing it again even quicker - sadly, she then crashed and was one of the two taken away by ambulance but is understood to have escaped injury Elisa Longo Borghini (Hitec-Mistral) also fell, as did Olivia Koster (Specialized-DPD-SRAM). Esra Tromp (Skil-Argos) had a go at escaping around 40 minutes later and ended up becoming one of the highlights of the event, remaining out in front on her own right into the first few laps of the 9.3km circuit and building her lead up to 30" at one point: a move that will have pleased fans, sponsors and her mother, who also races, alike.

After a quarter of an hour or so, Rabobank's Iris Slappendel bridged and the two women rode together for most of the remainder of the race, though it was a notably once-sided partnership with Tromp using up all the energy she had left simply to stay with a more experienced rider for as long possible. If only she'd had that experience, they might have worked closely and the eventual outcome could well have been very different; as things were Tromp eventually dropped away. Slappendel put up a heroic fight, continually increasing her speed and managing to add big chunks of time, but the chasing pack kept on chipping away at it. She was caught with two laps to go.

Adrie Visser (Skil-Argos) attacked a short while afterwards, causing a flurry of activity in the peloton, but it soon became apparent that she was only trying to find out who would respond and get herself up to the front. Nina Kessler (Dolmans-Boels) & Petra Dijkman (Kleo) got away together five minutes later and were caught a minute later as the race entered the final lap. With all threats neutralised, the entire peloton slowed down as riders began daring one another to attack in the traditional game that comes before a bunch sprint. This continued all the way into the last kilometre; a nail-biting, edge-of-the-seat situation for fans as there was no way to predict who might win - or even who might try to win - until Visser deemed it the right moment for her real attack, exploding towards the line with 70 riders going with her. Liesbet de Vocht (Rabobank) was second fastest; the first 71 riders all recorded the same time.

Visser at the finish line, pictured by Bart Hazen

On the road (Time-BST, info culled from Twitter and other sources). Refresh for updates.
>16:40 It's Adrie Visser! Visser wins 2012 Erondegemse Pijl for Skil-Argos! Liesbet de Vocht (Rabobank) is second.
>16:35 2km, riders altogether. It's going to be a bunch sprint.
>16:29 Peloton has slowed right down now, all the riders daring one another to attack. It's going to blow up any moment.
>16:25 ...and they're caught. Last lap.
>16:24 Nina Kessler (Dolmans-Boels) &  Petra Dijkman (Kleo) get away together.
>16:19 Mascha Pijnenborg wins Sprints Classification.
>16:16 Adrie Visser attacks!
>16:14 Two laps left, gap down to under 10" - the end is near, but what a brilliant break it was.
>16:09 Race progressing at superspeed now as the peloton try to reel in Slappendel and Tromp. Have they left it too late...?
>16:07 The peloton is now a long, thin line.
>16:04 Here we go again as the pack click up another gear, reducing the gap by half.
>15:56 Three more laps of the 9.3km circuit. Incredibly, Slappendel has increased the gap to 26"; the pack are going to have to take some serious action soon.
>15:52 Gap down to 13". If only Tromp was a little older and more experienced, they might have been able to work together and won this - she have too much of herself maintaining her solo lead (the sponsors will love her for it, though).
>15:51 Esra Tromp, who has done so much to enliven this race.
>15:49 But the pack won't let her get away with it that easily! They've just clicked up a gear and slashed the gap to 15".
>15:47 Slappendel's putting in all the effort and has lengthened the lead to 25" as Tromp hangs on for dear life - she won't be able to keep up with her for long now.
>15:46 Polspoel was third to the top of the fourth and final climb, making her the GPM winner today. Chapeau!
>15:42 Actually, Slappendel is 27. Sorry Iris!
>15:41 Peloton upping the pace to try to reduce the gap - Slappendel's too dangerous to be allowed to go unchallenged. It's down to 15".
>15:38 Slappendel turned 28 in February and is a highly accomplished rider. She joined Rabobank when Garmin-Cervelo's women's team closed down in 2011, while most of her team mates - including British stars Emma Pooley and Lizzie Armitstead - went to AA Drink-Leontien.nl.
>15:35 It was Iris Slappendel! Unsurprisingly, she's caught Tromp and they now have 21". Expect other victory contenders to start trying to bridge now.
>15:30 An unknown rider goes after Tromp.
>15:30 Five laps left.
>15:27 ...now 30".
>15:26 Tromp has 15".
>15:24 Tromp is 21 and studies business admin. Her mother also races.
>15:22 Esra Tromp (Argos-Shimano) lauches an attack
>15:13 Riders fast approaching the finish line for the second time - but there's still a long way to go: when they get there, they have to complete the six laps of the final circuit.
>15:08 Proving a good race for TopSport Vlaanderen-Ridley's Maaike Polspoel - she won the first two GPM and was second in the third GPM and second sprint. Grabbing points left, right and centre!
>14:51 Riders all together
>14:44 After departing the feeding zone, the group reconvenes
>14:42 The riders have arrived at the feeding zone
>14:40 Emma Mackie attacks solo, builds 10" advantage
>14:38 Average speed 41kph in the first hour
>13:35 Raining lightly
>13:32 135 riders started at 14:30 local time