Bronzini's blitz at the Bay Crits
Giorgia Bronzini, the World Champion in 2010 and 2011, made cycling history at the first six stages at the Route de France last year - the Italian sprinter conceded only the prologue, to Emma Johansson, and the final Stage 7 to her team leader Linda Villumsen, who won overall. She managed a similar result at the Mitchelton Bay Crits last week by winning three out of a total four stages, and won the General Classification as a result.

Bronzini's team mate Peta Mullens, who spent much of the race attacking anything that moved (especially if it happened to be wearing an Orica jersey; meanwhile, Valentina Scandolara of Orica returned the favour) won the Sprints classification while their team, the British-registered Wiggle-Honda, won the Teams classification.

Chloe Hosking (Roxsolt) was the only other rider to win a stage, forcing Bronzini and Orica's Nettie Edmondson into second and third when she launched a powerful sprint more than 400m from the finish - it was not the first time she's beaten Bronzini and is further evidence that she's destined to win cycling's ultimate accolades in the coming years, but Stages 3 and 4 being much tougher than 1 and 2 it was clear that shifting Bronzini from the lead was going to take a serious effort. Then, strong winds combined with a short and steep climb to make the going even harder; perfect conditions for a rider with Bronzini's strength to gain the upper hand once more. She did so, once again with help from Mullens who wore down the opposition, and crossed the line with a healthy advantage.

Wiggle made sure they had Villumsen keeping control of a break during Stage 4, but explained afterwards that it hadn't been her intention to go for a stage win because she wasn't feeling 100%. With a lead of six points over Edmondson going into the final stage, Bronzini could have played it safe and remained a few places back from the front line, making sure she finished highly enough to keep first place. That's not her style, though, and she was right in the thick of it with Valentina Scandolara (Orica), Tiffany Cromwell (Specialized-Securitor), Hosking and Edmondson as the finish drew near, and once again was the strongest - and finished the race with an advantage of twelve points.

Unfortunately, Stage 4 was not without controversy: Hosking (and many fans) felt that while Bronzini's victory was fully deserved, Wiggle had not acted honourably. "Giorgia Bronzini is a class act but can’t say the same about the way Wiggle Honda and their development team colluded today to ruin the race," she Tweeted, arguing that her team could have used the same tactic but chose to "race fair."


Compton conquers Rome
Katie Compton has always been an outstanding rider, but over the last couple of seasons she's been steadily getting better and better and now poses a threat to the dominance of cyclo cross by Marianne Vos. At the Rome round of the World Cup on Sunday, she gave a demonstration of just how real that threat is, forcing the Dutch rider to work hard simply to keep up before she cracked halfway through - something we've rarely, if ever, seen Vos do before now.

Ellen van Loy was quickest off the start and led around the first corner, with Compton not far behind. Then the race seemed to enter a familiar pattern when Vos and Harris upped their pace, overtaking the American before Vos got right behind van Loy. Van Loy, however, wasn't going to give up the lead without a fight, and it took Vos almost all of the first lap to get the better of her.

Vos and Compton now began their own private battle, responding to one another's turns of speed with ever more acceleration so that, going into the last lap, they'd opened a gap of 54" on the chasers. For a brief time, Vos was ahead and many fans will have expected the outcome to have already been decided: after all, she is Vos. But then, Compton found the strength for another burst, and this time Vos could not respond when she just kept going, eventually reaching the finish 24" ahead.

The reign of Vos is far from over, but we're apparently at the start of a new era. Few people will be as happy about that as Vos herself, because Vos relishes a challenge even more than she loves to win.


Charline Joiner and Kerry McPhee injured
Scots riders Charline Joiner, winner of two medals at the Irish International Track GP last year, and Kerry McPhee required hospital treatment following a pile-up during a training ride in Girona on Saturday. Joiner suffered three minor fractures to the transverse processes of her spine while McPhee was left with concussion and bruising.

Both riders have been Tweting, in Joiner's case from hospital. Follow Joiner here and McPhee here.


Team News
Argos-Shimano saved
The Dutch team, home to Kirsten Wild, Lucy Garner and the ever-popular Marijn De Vris, among others, has been saved for 2014 by Giant. Previous sponsor Argos, a fuel company, had initially agreed to back the team until the end of 2014 with an option in the contract to continue that support in 2015 if it wished, but was later purchased by Russian firm Sistema and the contract was ended early.

Late in 2013 the team announced that an American organisation had signed a three-year contract but this agreement was ended within a week for reasons as yet unknown, casting the future of the team - and especially the women's team, as managers tend to experience greater problems in securing sponsors for their women's squads - into doubt. Fortunately Giant, which also sponsors the Dutch Rabobank-Liv/Giant women's team, has stepped in with an agreement to support the team for the next year.

New bikes for Optum
Meanwhile, Optum p/b Kelly Benefit Strategies have a new bike provider in the form of a company that is so associated with the BMX world that few people even realise they produce road bikes - Diamondback.

""Diamondback has made a significant commitment to our program and is working very closely with our staff and athletes to deliver the most competitive racing machines available," says Jonas Carney, performance director of Optum's men's squad. The men's and women's teams will both be equipped with the manufacturer's Podium Equipe frames.


Shorts and Interesting Links
Good riddance!
The well-trained eyes of "media maven at a major cycling company" Chris Garrison spotted a rather displeasing recent Cycling Weekly interview (5th December) with former Team Sky directeur sportif Dan Hunt, who has recently left the world of cycling behind for a new job in something called "Premier League football" (I've no idea what this "football" is, but it sounds incredibly dull in comparison to cycling)...


"It all happened very quickly. I told Dave [Brailsford] and his reaction was great, as you would expect. I think he was quietly quite proud; after all he was the person who took a punt on me in 2005. I've grown under him, and it's quite incredible to think that people from this little sport of cycling after getting poached by other sports.

It demonstrates where cycling is; the fact that someone who started off with the women's team and worked their way through the BC and Sky ranks is off to work in football."

Well, that explains why Sky never seemed to have any interest in starting a women's road racing team. Still, it's nice to know that someone who held a powerful and responsible position in cycling, yet held women's cycling (and cycling in general, apparently) in such disregard, is no longer a part of it.

Yoko Teut is "still going to be involved" in team
"...She’s still talking about how “maybe I should be riding.” She doesn’t want to quit! But it’s good timing for her. She might move to New York to work with the Star Track program. It’s a program in Queens on the velodrome for urban kids. And she’ll also direct our team for races in America," team owner Kristy Scrymgeour told Leah Flickinger in an interview published by Bicycling.

Norway gets UCI race
Norway is to host a UCI women's race in August this year. The event, organised by the National Federation, will run from the 15th to the 17th.

"I've had to wait a long time for this - it's a step in the right direction!" said Karl Lima, manager of the Norwegian Hitec Products-UCK team. Hitec rider Emilie Moberg has been involved in the organisation. 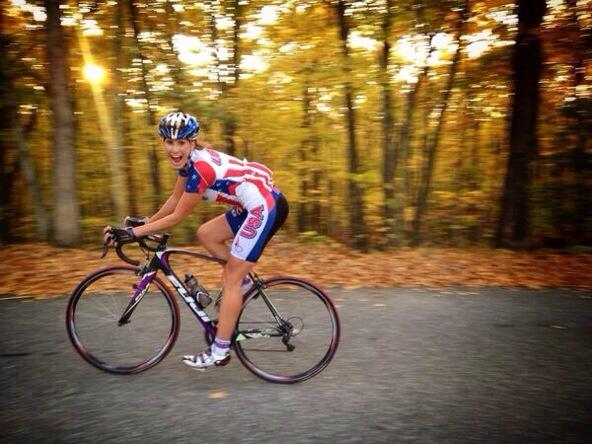