Tour de San Luis
Stage 1
British rider Hannah Barnes (United Healthcare) was the fastest in a 41-rider bunch sprint to win the first stage. Team mate Alison Powers led Barnes out 500m to the line; Barnes jumped with 150m to go and powered past the rest of the bunch.

Yudelmis Dominguez Masague, riding for the Cuba National Team, picked up the most points in the two intermediate sprints and now leads the Sprints classification.

Barnes, making her race debut for the team, will now be widely considered a favourite for overall victory as the race consists chiefly of short stages likely to end in further bunch sprints. The final stage takes place on Saturday.

Stage 3
Alison Powers (United Healthcare) wins with a 3'18" advantage, propelling herself into first place overall with a lead of 3'04 as well as becoming new leader of the Combination classification. Team mate Alexis Ryan wins bunch sprint for second place.

Whatever happened, though, it was no secret that this race was almost certain to be a competition between the two women right from the start, with the rest of the field fighting it out among themselves for third place: both are based in Belgium and as a result have opportunity to attend a far greater number of races than the British-based riders. Whilst 'cross does appear to be on the up here, we don't have anything like as many races as in Belgium, where the sport is enormously popular and draws crowds of thousands; Wyman and Harris have a selection within in relatively easy reach of their Flemish homes throughout the season.

Wyman's had an excellent season so far, winning the European Championships for a second consecutive year back in November and is evidently in fine form. Harris was second in that race too, though, and has also performed superbly this season. There's no doubt that sooner or later the baton is going to be passed, but when the heavy rain on Friday night combined with Saturday's races to turn the Moorways parcours into a quagmire of which even the infamous Flemish races would have been proud, things began to look ever better for 32-year-old Wyman because in conditions that slimy, experience counts and her formidable bike-handling-in-treacherous-mud skills are well-known - and well-respected - throughout the cyclo cross world.

Harris was able to match her friend and rival's typically lightning-fast start, but once out on the fields it was clear that she wasn't going to be able to keep up and before very long at all Wyman had ploughed away into the thick of it. All those years as the best 'cross rider in Britain have left the St. Albans-born rider with an ability to read the track that is almost psychic - where other riders see the surface and have to experiment in the early laps to find the best lines, Wyman has an uncanny ability to see what lies beneath and find the firmest paths through it, enabling her to start building her advantage from the moment the race gets under way. Then, because she's got the strength to match, she can keep going.

However, after crossing the line completely caked in mud, even Wyman herself was genuinely surprised by her winning margin: finishing in 41'14" compared to Harris' 42'28", she was an incredible 1'14" faster and isn't ready to let go of that baton just yet. Just how much of an advantage they had over the rest of the field was apparent when Ffion James of Abergavenny Road Club finished 4'23" after Harris for third place.

What makes Helen's victory even more remarkable is the fact that she underwent root canal surgery on the Friday before the race. You can read all about that in her own report.

Around the World
Britain's Championships weren't the only ones taking place over the weekend - there were more CX Nationals taking place around the world and even some Road Nationals. In the "CX Top Four" nations the were few surprises with Sanne Cant winning in Belgium, Marianne Vos winning in the Netherlands, Katie Compton winning in the USA and Pauline Ferrand Prevot winning in France.

Each nation's results are at the end of the following links...

Rushlee Buchanan kicked off her year with new team United Healthcare in fine style by winning the New Zealand Road Race Championships, the first road racing championships to take place in 2014. Jaime Nielsen took the Individual Time Trial title, taking an unexpected 28" less than Linda Villumsen to get to the finish.

In the Australian Championships, Orica's Gracie Elvin took the Road Race when she was first over the line from a bunch of eight favourites that all recorded the same time. The ITT went to Felicity Wardlaw.


Otegem CX
So on Sunday you won a decisive victory at a major national sporting competition. What do you do on Monday? I know what I'd do - sleep until midday, get up to a leisurely breakfast and then be in the pub for 3pm. But I'm not Helen Wyman who, having won the British National Cyclo Cross Championships for the eighth time on Sunday, traveled 600km in a camper van to back in Belgium on Monday morning ready to race at the Otegem CX. Which she also won, beating Sanne Cant, who won an eighth title of her own at the Belgian CX Championships on Sunday. 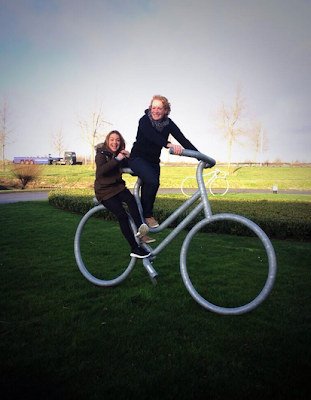 "Yes, it weighs half a ton - but with Kirsten pedaling, it'll still win the final sprint!"
(With thanks to Kirsten Wild and Lucy Garner)
Posted by john_orbea at 12:00