Bronzini opens 2014 season
It isn't every day that Orica-AIS find themselves entirely outclassed and you can bet your packet of energy gel that the Australia-based team will make damn certain it doesn't happen again this year, but they were definitely playing second fiddle to Wiggle-Honda in the first round of the Mitchelton Bay Classic on the 2nd of January.

While Giorgia Bronzini - and Orica's Nettie Edmondson - kept themselves to themselves in the pack, the Italian's team mate Peta Mullens handed out punishment right from the start, attacking virtually non-stop and rapidly whittling down the field to just a handful of tough riders, then continued beating them into submission too while fellow Wiggle riders Linda Villumsen, Emilia Fahlin and Charlotte Becker kept the entire race under control. Orica's new recruit Valentina Scandolara was first to respond to most of Wiggle's attacks, chasing them down one after one, but it was Wiggle that controlled the race and by the time Tiffany Cromwell (Orica) launched her surprise attack coming into the final straight, Orica could not help her and she had to try to take on Bronzini unassisted.

Cromwell's attack, had events have played out only slightly differently, could well have won her the race; however, Bronzini and Edmondson had done such a fine job of conserving energy up until this point that it was clear they'd be the ones to take the top two places. Bronzini proved the strongest, generating the enormous amount of power that has rightly led to her being regarded one of the fastest sprinters in cycling history; Edmondson stayed close but could not find the extra burst she'd have needed to get past.

"It’s my first experience racing at this time of year, but maybe Geelong brings me luck,” Bronzini said afterwards. “I have some good memories of Geelong, so I’m happy to win again in this area."


Van Paassen to Boels-Dolmans
25-year-old Sanne van Paassen, who took second place in the Dutch National Cyclo Cross Championships, won the Heerlen CX and was second at Gent-Wevelgem in 2013, will move from Rabobank-Liv/Giant to Boels-Dolmans for the new season. Currently recovering from a knee injury, it is not yet known when she will make her debut for the team.


Boels reveal Qatar team
Meanwhile, Boels-Dolmans has already revealed its roster for Qatar. The team will be led by Ellen van Dijk, making her debut for the team after her switch from Gunnewijk's Orica, and will include Lizzie Armitstead, Marieke van Wanroij, Kasia Pawlowska, Christine Majerus and Romy Kasper.


Gunnewijk to ride Women's Tour
Orica-AIS rider Loes Gunnewijk has confirmed that she plans to ride the Women's Tour in 2014, making her the latest rider to confirm her interest in what is rapidly becoming the most talked-about race in women's cycling for years. She will also ride the Bay Classic, the Tour of Qatar and the Ronde van Overijssel.


Women's Tour of the Reservoir
Organisers of the Tour of the Reservoir, due to take place at Blanchland in Northumberland on the 12th of April, have announced that their event will include a women's race for the first time. Few details have yet been made public, but the race will be only 70km in length according to British Cycling - which may prove unpopular with riders, who have been calling for longer events. 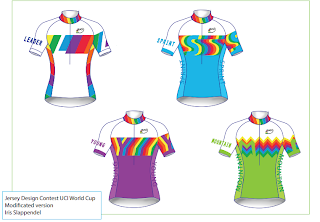 You may remember that back in October the UCI announced a competition to design a new women's World Cup jersey. It's since been won by none other than Iris Slappendel, the Rabobank rider who won the Open de Suede Vargarda round of the World Cup in 2012. Slappendel left university after graduating in design and produces a range of fashion accessories created from recycled inner tubes.

Slappendel had initially designed three jerseys, once of which was chosen to be used; she then made some improvements and added a fourth, impressing judges so much that all four were chosen as winners. The UCI had expected the competition to be won by a fan and had offered an all-expenses-paid trip to a round of the World Cup as a prize; they'll now have to come up with an alternative as Slappendel is a member of favourite Marianne Vos' team and will be riding at most rounds of the Cup.