El Salvador has not been listed among the great cycling nations in years gone by - though they do take sport very seriously, having had a war with neighbouring Honduras after a football match - but they've certainly got a taste for women's cycling: already this season the tiny Central American country has played host to the Grand Prix de Oriente and Vuelta El Salvador, now it's time for the Grand Prix Grand Saint Bernard and tomorrow the Grand Prix El Salvador. It's a very fine place for bike racing too, with 65% of the nation being mountainous (including volcanoes) and most of the rest being beautiful tropical rainforest - thanks to environmental programmes El Salvador is one of the very few nations where rainforest is actually increasing.

Some of the European riders might feel rather at home at the end of the race due to the finish line being located at the Grand St. Bernard Swiss Resort and Spa. This hotel, high in the mountains at Juayúa and owned by the main sponsor (hence the name of the race) is modeled on a typically Alpine chalet, while the rest of the town is characterised by its well-preserved Spanish colonial architecture. To get there, they'll pass through unmistakably tropical rainforest landscape and climb some tough mountains.

The race begins at capital city San Salvador before heading first north and then east around the El Boquerón volcano, a familiar sight to those who took part in the Vuelta El Salvador which climbed it in Stage 4 - they don't need to repeat that climb today and, having started at an altitude of 744m, face only a small and gradual climb over the first couple of kilometres before a long descent - gradual at first, then steeper - leads into a flat section approximately 30km in length. It's likely that several riders, probably in groups, will attempt to use the descent to get ahead of the climbers and then try to extend any lead they can find in the flat section, thus giving themselves a greater chance of staying within reasonable distance on the big climbs lurking towards the end of the race. Many climbers, being too light to keep a comfortable level of control over their machines on fast downhill sections, don't like descents and may prefer to allow a break to get away; their teams will respond to a break by sending out chasers to try to bring back escapees on the flat section in order to get climbers where they need to be for the second half.

The terrain starts heading upward at Ciudad Arce, 44km along the parcours, where the altitude is 470m above sea level. 8km later, having climbed 380m, they arrive at El Congo and an altitude of 850m. A short descent of around 4km follows and precedes another flat section some 12km in length, potentially the scene of more breaks as riders try to get ahead in preparation for the big climb up to 1,471m at 82km. This is where the climbers get their own chance to take the lead: with the road turning downhill for the next 12km, they'll need it because they're going to be chased all the way to the final 3km where the race begins a 40m climb to the finish line - while that's an average gradient of only 1.3%, note that the parcours becomes steeper on the approach to the final flat 500m.


Taking place the day after the Grand Prix GSB, the Grand Prix El Salvador is the final UCI Elite women's race of the season and gives those riders that don't specialise in mountains a chance to turn the tables on the climbers. Possibly, at any rate - El Salvador, being situated on a tectonic rift, has many volcanoes and mountains; a race organiser would be hard pushed to set out a parcours that didn't feature at least a bit of climbing.

Once again the riders start their day in the capital San Salvador, but this time they head south out of the city before turning east towards the nation's second biggest lake, Lago de Ilopango, situated in a 72 square kilometre volcano crater. This volcano was subject to a huge eruption some time in the 5th or 6th Century CE, which destroyed several Mayan cities and made agriculture impossible in the region for many years; it last erupted - on a much smaller scale - in 1879-80. Before reaching the lake, the riders turn south again and head towards Comalapa, descending from the race's highest point at 779m above sea level 2.1km from the start to 154m at 28.1km; since many climbers are not good descenders, this gives the rest of the peloton - especially the less well-known riders, eager to please sponsors by showing off their jerseys at the head of the race - the opportunity to leave the climbers far behind. With a climb of 600m in the final 13.6km, average gradient 4.4%, they'll want to do precisely that to prevent a climber getting away as the finish draws near. 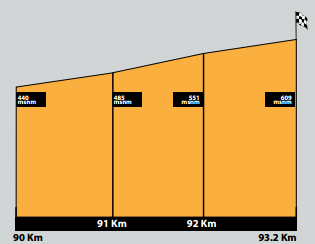 At the airport 29.6km in, the altitude drops to 59m and then remains relatively flat, climbing only two small hills before a long, gradual descent to 79.6km where the riders will be only 9m above sea level - 50km in which a breakaway group could extend its lead or the peloton could draw them back in, sending chasers out to catch them while the teams cluster around their climbers to keep them up to speed and get them into position for the final climb. The final 3km, running into Zaragoza, climb at an average gradient of around 5% all the way to a straight section leading to the finish; a challenge after 90km, but not steep enough to automatically give the climbers a winning advantage - the eventual winner of this race might not be a dedicated climber, as was the case in 2012 when all-rounder Noemi Cantele won days after taking sixth place overall in the Vuelta El Salvador.