The second race of the four-day Drentse Week, the Ronde van Drenthe comes two days after the Drentse 8 and is a completely different sort of race: while the 8 is flat and favours sprinters, the Ronde features three climbs of VAM berg - the highest point in Drenthe and a climb that in true Northern Classics style makes up for its lack of altitude with knee-busting steepness, rising to 56m above sea level in just 0.4km at an average gradient of 9.7% with steeper sections up to 16% on the way. Think it doesn't sound too bad? Even Marianne Vos has to put serious effort into getting up it...

In addition to the three ascents and because a 16% gradient isn't enough to satisfy Dutch cycling fans' idea of what a hard race should be, there are also plenty of cobbles, numerous tight corners, narrow bridges, slippery moss-covered roads and - always a potential issue in this part of the world at this time of year - the weather: there's a very good chance that riders will face rain (and perhaps snow), freezing temperatures and strong winds blowing in from the North Sea. Sounds like fun, doesn't it?

The women's race has been running under various names since 2007 and has been dominated by Dutch riders: Adrie Visser won the first edition, followed by Chantal Beltman in 2008, Swedish Emma Johansson in 2009, Loes Gunnewijk in 2010 and then Vos in 2011 and 2012. After a typically excellent cyclo cross season and a swathe of triumphs last year, Vos is the easy favourite; however, her enormous talent and success has forced rivals to respond and she won't win again without serious challenges from other teams. 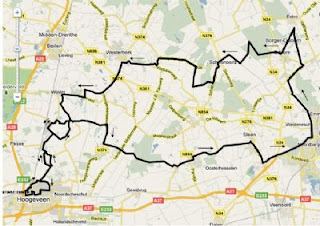 Drenthe is located in the north-eastern corner of the Netherlands, just south of Groningen. Densely populated during the Bronze Age, it's now a rural province with a far lower population density that most of the rest of the country. In the Netherlands, it's nicknamed "The Cycling Province" due to the large numbers of cyclists from across Europe who come to ride on the quiet, excellent roads. At the beginning of the Second World War, Drenthe was home to a camp housing German Jewish refugees who had fled the Nazis; after the Netherlands was invaded the camp was taken over and became a transit camp from which Jews, Gypsies and others were sent to the concentration camps (among them, Anne Frank, who was placed on the last train to leave the camp for Auschwitz where she died early in March 1945). Today, the province frequently plays host to historical re-enactments of the conflict, as Australian star Bridie O'Donnell discovered when she took a wrong turn on her way to the race in 2010 and ended up right in the middle of one.

VAM berg's unusual name comes from the fact that it's not a natural feature - it used to be a rubbish dump maintained by the Vuijl Afvoer Maatshappij ("Waste Disposal Company") who covered it in soil and turned it into a hill once it reached the end of its operational life. The riders climb it for the first time 9.4km after reaching the end of the neutralised zone at Hoogeveen - with the surrounding landscape being so flat, the views from the top are superb; however, since it's such a crucial factor in deciding the eventual outcome of the race the riders won't take much notice even at this early stage. There are the first GPM points of the race on offer for the first riders to the top and there is plenty of opportunity for a breakaway on the way down - if a rider or group does manage to get away here she or it is unlikely to stay away for the remaining 122km (although it might not be particularly surprising if Vos managed to pull that one off), but it's a chance for those riders who don't have much chance of winning to get some time out in front where the press can notice them. The first third of the climb is steepest with an average gradient of 14%; it becomes progressively less steep over the last two thirds to the summit.

Once through Nieuw-Balinge, the riders enter an area with many ponds and small lakes formed by the peat cutting industry that brought much of the region's income and shaped the landscape. At 20.2km, now in forest, they come to the first cobbles - a 500m section made especially treacherous by the moss and algae that grow in the damp forest and a real challenge for riders in any break that got away earlier now that they'll be wanting to extend their advantage in preparation for the intermediate sprint at Emmen, 41.8km into the parcours. There are more cobbles, albeit far less dangerous ones, on the way through Exloo from 50.1 to 53.8km, then some more at Borger-Odoorn from 57.2 to 60.7km and again at 67.1 to 69.1km before the race enters a 14km section featuring several tight corners and narrow stretches en route towards the second ascent of VAM berg at 93.1km, where there are again points for the first riders up and scope for the race to change dramatically - a break could be caught on the way up or might extend its lead if it includes climbers, or a new one might form.

Heading back along some of the same roads they used earlier, the riders make their way back to Hoogeveen and begin the third part of the race. At 106.5km they pass over the finish line for the first time, beginning the second intermediate sprint. They then head back out of town in the direction of Stuifzand, negotiating some hazardous sharp bends after around 111km before entering the VAM industrial site once more for the third and final climb of VAM berg at 119.9km. Now, the order in which the riders climb it is important: there are insufficient kilometres to the finish line for the peloton to risk allowing a strong break to get away and, should one form, expect the teams to work together to bring them back rapidly; if it's a superstrong break, made up of some race favourites and their most able domestiques, the eventual winner will be among them. This last section will probably see an increasing number of attacks as riders test one another, finding out who has a the strength left for a last push and who won't be able to hold their own. After passing through Stuifzand for the final time, the race returns to Hoogeveen where the riders head into town along the Griendtsveenweg, then turn the last corner, left at a roundabout onto Rembrandstraat - not an easy corner as the wide road is split into two narrow carriageways by a central island for much of its length, creating a potential bottleneck if a large number of riders fighting for good positions to begin the final sprint are compressed into a tight area. The width of the road doesn't change from now on, meaning that if a bunch is leading the race sprinters may have difficulty in forcing their way through to the front in time for the final 300m to the finish line on Prinses Beatrixstraat.

More information nearer to the race