There have been several races in exotic, warmer climes such as Qatar, Costa Rica and El Salvador already this season and even three in the somewhat less warm at this time of year Belgium; now the fantastically-named Drentse 8 van Dwingeloo marks women's cycling's return to the home of its greatest star (that's Marianne Vos, of course) - the Netherlands.

Drentse 8 began in 2007 with Regina Sleicher taking first place, then Ina-Yoko Teutenberg dominated with three consecutive victories before Vos won in 2011. Vos, who by 2012 had left little doubt that she's the most successful cyclist in the world today (some would say ever), was favourite for the World Championship in 2012 but ultimately lost out to Giorgia Bronzini, another rider who has done well in this race with third place in 2007; when they faced each other at the Drentse 8 early in 2012 many fans expected the outcome of the race to be decided between the two riders and were therefore surprised when the then-little-known 21-year-old Australian Chloe Hosking (now riding with Hitec-UCK) proved herself their equal when she got the better of them both in an 11-woman final bunch sprint - a glorious and entirely unexpected finish.

The Parcours
If you're wondering where the "8" in the race's name comes from, it's due to the shape of the route - a great big 47km figure of eight (well, sort of - it's a straggly 8 with an extra loop on top) around which the riders race three times. Dwingeloo, home some 2,500 people, has a claim to fame that few villages can match - two galaxies, Dwingeloo 1 and 2, both of which are approximately 10 million lightyears from Earth - are named after it; the connection being that they were discovered using the 25m radio telescope (the largest in the world when it was built in 1956) just south of the village. 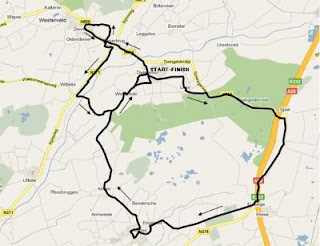 Having started on Brink, a street in the village, the riders head north-west and into the first loop, then south and back to Dwingeloo before turning east and passing through the Nationaal Park Dwingeldvelde, at 37 square kilometres the largest area of wet heathland in Western Europe. The telescope, restored during 2012 and now a national monument, can be seen over the trees from various points along the road. The route then heads south before turning west to skirt a plain dotted with circular lakes, thermokaarsts created by retreating glaciers in the last ice age.

Drentse 8 is the flattest of the three Drentse Week races (the others are the Boels Rental Ronde van Drenthe, taking place on the 9th, and the Novilon Euregio World Cup race one day later) but the numerous technical sections along the parcours, including numerous tight corners and cobbles interspersed with long straights, makes this an ideal race for attacks - last year, they came in waves and continued throughout the event. It's very likely that this year's race will see more of the same; whether any one of those attacks will lead to a break getting away and staying away from the peloton in order to avoid another bunch sprint finish will be decided on the day.

More information closer to the date
Posted by john_orbea at 12:37