Giro Trentino Donne Stages 2a and 2b 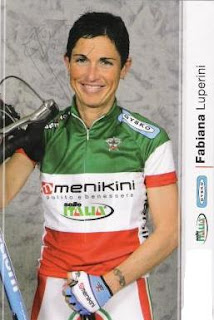 Sunday morning's Stage 2a consisted of four laps around a 15.7km parcours at Sarnonico, without the big climbs that have formed part of this race in years gone by but with a few hills. A small rise of only around 35m began right at the start line and continued for the first 0.8km, followed by a mostly flat section leading to just past 5km and a 135m descent to 7.5km; from that point back to the start line it was mostly uphill through the forested hills just north of Romeno.

There were the three intermediate sprints - the first at 16.5km, the second at 31.4km and the third at 47.1km; each of them beginning at the top of the low hill 0.8km after the finish line. The first two fell to Fabiana Luperini (Faren-Honda) with Sharon Laws (AA Drink Leontien.nl) second, Grete Treier (S.C. Michela Fanini Rox) third and Tatiana Guderzo (MCipollini-Giambenini-Gauss) fouth, the four of them having led for most of the race despite the consistent effort of a strong chase group that included Emma Pooley (AA Drink-Leontien.nl), Judith Arndt (GreenEDGE) and several others. Luperini and Laws switched places on the third.

The hills weren't big, but 242m of vertical gain per lap has a cumulative effect: not far off 1000m for the entire stage - that's a respectable climb by anybody's standards and was expected to bring the climbers, many of whom were left looking a little out of place on yesterday's flat and sprinty 98km parcours, right back into the game. There might not be any of the knee-busting high mountains where the likes of Pooley could leave the rest of the field standing, but since the climbers will have suffered much less than the sprinters by the last part of the race they were expected to do well today. That turned out to be very much the case when five-time winner Luperini launched a solo attack leading into the final kilometres, breaking away from the other three leaders to gain a lead that grew to 28" for a short while. Only Laws could put up any sort of meaningful resistance, using a burst of sheer power to get within 12" as the finish line approached. She chased the Italian all the way, but her efforts came too late and Luperini won by 10" in what must have been one of the most hard-fought and exciting stage finishes so far this season. What made the situation even more interesting, however, is that the race was now in the unusual position of having the lead time shared by five riders, more than half of whom with an apparently very real chance of doing sufficiently well in the time trial to win overall... 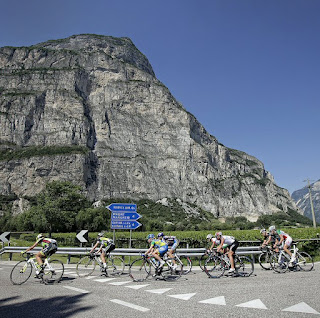 
Top Eight GC after Stage 2a

Stage 2b
This afternoon the riders were back in action on what seemed a rather flat and straight-forward 5km time trial on paper; exploring the route with Google Earth revealed a number of tricky corners and tight Z-bends, especially on the cycle path leading back to the start, and several of the riders said afterwards that the initial 0.8km were far harder work than they'd expected. It looked like a good one for Judith Arndt, race organisers fancied Emma Pooley's chances and fans had made various choices of their own.

Marta Bastianelli was the eleventh rider to go and set an early benchmark at 8'48.33", but it wasn't very long before Elke Gebhardt (Be Pink) cracked it with 8'40.45". Shelley Olds (AA Drink-Leontien.nl) then toppled her when she completed the course in 8'26.83", which stood as best time for a while until Katarzyna Sosna (Vaiana-Tepso) shaved off more than eight seconds to record 8'18.91". Inga Cilvinaite (Diadora-Pasta Zara) came close with 8'20.98" before Jessie Daams managed 8'17.58" (AA Drink-Leontien.nl).

By this time, the real big-hitters were getting ready to head out. Judith Arndt showed them all how it's done with a blistering 7'57.69" - the first sub-8' and enough, many will have thought, to win her the stage; but then Linda Villumsen (GreenEDGE) smashed it with 7'53.14", winning herself the General Classification and the stage. Noemi Cantele, who performed so well to win Stage 1, was still to go but at this point her ride was really just a formality: only her most die-hard fans would have given her much chance of beating those superb times dset by Arndt and Villumsen, and her eventual 8'08.06" is proof that she was outclassed. 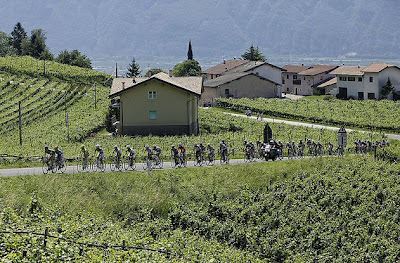 It has been, in the opinion of everyone following it that I've spoken to, an absolutely superb race full of excitement, first-rate riding and with nothing certain until the last few minutes, suspense. It should be remembered that it almost didn't happen this year: with the global economy in its current state, women's races (which have always been underfunded) are being cancelled left, right and centre, but fortunately the organisers managed to find a way to go ahead even though they were forced to cut it by one day. Yet the UCI is not in financial difficulty - in February this year, they very proudly announced that average salaries paid to (male) Pro Tour riders had risen from €190,000 to €264,000 over a three-year period from 2009 which, they say, is evidence that cycling is bucking the worldwide trend and doing very well ("So we're obviously doing a good job" is what they seem to really be saying).

The UCI is responsible for co-ordinating efforts to develop cycling in all its many forms. When riders asked president Pat McQuaid why it is that Pro Tour riders receive a guaranteed minimum salary and the female riders do not, the official line was that it's because women's cycling isn't "developed" enough.

OK Pat. Like a lot of fans of the women's sport, I've called you quite a few nasty names over the years. Right now I'm going to say sorry for that, even though you can't force me to keep my personal opinions quiet like you did with Chloe Hosking. In fact, I'm going to credit you with some intelligence (we'll overlook that whole South Africa thing from back in the day, even though it was really stupid, because hey, we were all young and foolish once). Now - a question: do you want women's cycling to develop, right to a level where races turn a profit, the development of cycling in all its wonderful shapes and forms being kind of point of the UCI and all? Do you, in fact, give a shit? (Don't forget that if women's cycling did turn a profit, it'd mean more cash for the UCI and for you. Betcha give a shit now, don't you?)

Races like this are how you do it. Stages 1 and 2a were hard-fought right from the start line and they finished with high-speed, high-adrenaline battles that would have made superb TV. Cycling fans love cycling, not just men's cycling (nor only women's, of course) - believe me, give races such as this one the backing they need to survive and grow and we will watch them. Thousands of us around the world have been avidly following Twitter for every scrap of information we can find, jut like British cycling fans used to tune into French broadcasts on shortwave radio before British TV cottoned on and paid the ASO for the right to show it. There is a potential audience, and just as soon as sponsors realise that they'll be wanting to give you money.

Do it - the UCI, cycling and you will be richer. You never know, people might even stop saying you're a dick.