The history of cycling is populated by numerous larger-than-life characters from the early days (Maurice Garin, Henri Desgrange, Marshall Taylor) to the present (Jens Voigt, David Zabriskie, Fabian Cancellara, Marianne Vos) and with so many in between (Louison Bobet, Missy Giove, Tom Simpson, Charly Gaul, Coppi, Anquetil, Hinault, Armstrong, Merckx, Jason McRoy, Firmin Lambot, Pantani and thousands of others) that it's practically impossible for any book to tell all the stories. Colourful lives, all of them - but few people ever lived a life quite like that of the British endurance rider Evelyn Hamilton.

Today, when women's professional cycling is almost entirely ignored by the media, it's so difficult for female cyclists to make their name as professionals that some of those who have done so warn others hoping to do the same that if it's fame they seek, they'll be better off looking elsewhere. If this is true in the 21st Century, is must have been all but impossible for a woman to get her achievements noticed in the first third of the 20th. Hamilton, born Eveline Alice Alexandra Bayliss on the 3rd of April 1906 in Westminster, London, was one who did.

Summarising Evelyn's life is a challenge to any historian because she was one of those people who seems to have believed that her past should be multiple choice, frequently recounting stories that cannot possibly have been true or are highly suspect - however, one fact that is in no doubt is that she won both the National Half-Mile Handicap and the Sporting Life Trophy at the Stamford Track in 1931. That success won her sufficient fame to be approached by the producers of the 1934 musical Sing As We Go, in which she can be seen acting as body double for Gracie Fields in a scene in which Fields' character Gracie Platt rides a bicycle. Around the same time, she appears to have befriended Claud Butler, head of the manufacturer that in those days built some of the finest bikes in the world. A photograph taken at the Paddington Track in 1932 depicts Hamilton astride her bike, dressed in a sleeveless Claud Butler jersey.

Butler sponsored Hamilton in 1934 when she set off on one of his bikes to become the first British woman to ride 1000 miles (1609km) in seven days - a feat she completed after 84 hours of riding. The bike was fitted with the brand new Constrictor Osgear, developed by the legendary Oscar Egg and manufactured under licence by Constrictor, a tyre company based in North London who would also introduce the first lightweight alloy wheel rims. The system featured either three, four or five cogs on the rear wheel with the chain moved between them by a cable-operated arm bolted onto the chain stay, while a jockey wheel fitted to the end of a sprung arm mounted to the bottom bracket maintained chain tension. Media attention was so great that Butler produced a commemorative bike named the Miss Modern Model, a high-end machine that sold well, notable for having a shortened top tube so as to be suitable for women (whose arms tend to be shorter in comparison to height than men's) and tweaked frame angles so as to maintain correct geometry - one of the very first female-specific bikes in history.

One year later, Hamilton was so famous that when she set off to ride from Land's End to John O'Groats (which she did in four days), she was presented to her fans by Ben Tillet who, before retirement a few years previously, had enjoyed enormous popularity as a Labour Member of Parliament and trade unionist. The event was filmed by Pathe News, and the recording still exists. In the coming years, her fame grew as she set more and more records, including riding 10,000 miles (16,093km) in 100 days aboard a Granby bike (fitted with the new Cyclo-Star gears that resemble a modern derailleur. This was the first time Hamilton used a non-Claud Butler bike for one of her long-distance journeys, but the reason for this is not known - had they fallen out or had Granby offered a tempting pay-cheque? We'll probably never know. She finished the ride - having embarked upon it to prove that women were capable of equalling men in terms of athletic achievement - on the 14th of August 1938. Another Pathe newsreel features Hamilton offering cycling safety and style tips.

That same year, Evelyn and husband Jack set up a bike shop under her name at 416a Streatham High Road, London - it would move briefly to 402a and then 398a (reason unknown, but the area suffered heavy bombing during the Second World War). The building still exists (51°25'21.21"N  0° 7'46.58"W) and is now occupied by a large homewares and furniture store, the shop front altered beyond all recognition. The Hamiltons ran the shop until circa 1968, but it continued as E. Hamilton under different ownership right up until 1984; by which time it also sold motorbikes. 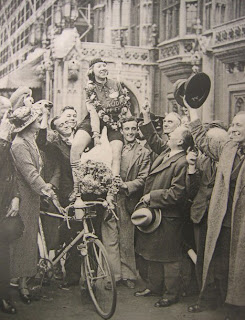 Precisely what Hamilton was doing during the war is a mystery - all that is known is that she wasn't seen at the shop for the entire duration. One rumour suggests she had one to France to become a wall of death rider for a circus and was trapped in Paris when it fell to the Nazis - there is some evidence to support claims that she spent the war in France, but the truth about what she was doing there is rather clouded by her own mythologising. During interviews later in her life, she seems to have amused herself by inventing contradictory stories - she told one reporter that she had pretended to be French and found work in a cafe popular with members of the Gestapo and another that she had taken the identity of a dead woman and lived - and possibly bigamously wed - a local named Fernand Helsen. Once, she claimed that she had worked for the Resistance, using a tandem to surreptitiously transport wanted people in heavy disguise across the city until she was captured by the Gestapo - but was able to escape when she pulled a miniature gun from her hair, shot her captor and fled, later managing to get herself back to England. Whether the story is true is as good as up to one's own personal opinion, but the way she told it it was most certainly convincing - she was awarded the Cross of Lorraine by President De Gaulle after the war.

In fact, the truth about where Hamilton was and what she was doing during the War may be far stranger than even her tallest stories. According to some, the Hamilton shop operated as a front organisation for the Free French Forces (a partisan army that fought hard against the Nazis long after the country was occupied) and the British Special Operations Executive, the top secret intelligence and guerilla warfare organisation. Lending credence to the story is the fact that Helsen did exist but, far from living in France during the war, was an employee of the French Embassy in London - according to gossip, Hamilton was known to had affairs with a number of men other than her husband (one of whom may have been the father of her son John who died when he was ten months old and seems was not the child of either Jack or Helsen and, until proof of his existence was uncovered in 2011 was generally supposed to have been another of Hamilton's invented stories - she had been known to claim that the baby was taken by the Nazis when she was in France and never seen again) and it's just within the boundaries of possibility that the tale of a bigamous marriage (a crime for which she seems to have never been investigated) and the other stories were invented to cover up a more professional relationship and official, covert activities. Whether they married or not, she took Helsen's name and retained it for more than half a century after his death in 1950. Oddly, nobody knows what became of Jack - had they divorced, in which case her claimed marriage to Helsen was not bigamous? Did he die in the War? Did he even exist?

While she was away during the War, Hamilton's shop was run by three Frenchmen and, as befits a woman who lived such a remarkable and strange life, their identity is unknown. However, at least one of them may have been one of the famous Pélissier brothers: Hamilton had been known to mention a distant cousin of hers who had won the Tour de France - as Henri Pélissier had done in 1929. Henri was shot dead by his lover Camille Tharault in 1935 and an older brother was killed during the First World War, leaving Francis and Charles who survived until 1959.

After relinquishing control of her shop, Hamilton moved to the Norfolk town of Swaffham where she lived for the rest of her life and served as president of the Breckland Cycling Club (and, according to locals, had more affairs). She died there on the 29th of May 2005 and is buried in the town, her gravestone bearing the name Evelyn Alice Helsen.