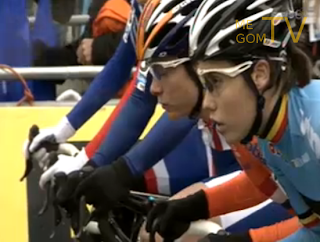 It's been said that Marianne Vos versus the rest of the world is not as uneven a match as it at first appears (except to those who have followed her career and know that the world doesn't stand a chance). The 24-year-old Dutch cycling phenomenon proved this to be the case once again today with a record fifth World Cyclo Cross Championship on the challenging Koksijde sand dunes, breaking away early and leaving the rest of the pack to battle it out for the silver and bronze medals. Incredibly, she was not at her best - sand is not her ideal habitat and she revealed after the race that she hadn't been feeling 100%; but Vos running at 75% remains devastatingly effective. She rode with Sanne Van Paassen for a short while, then gained a lead and kept building on it by powering up the dunes with a slightly fudged dismount and late bike change having little impact on the ultimate outcome. Having now won five times, she becomes the joint second most successful rider in the history of the cyclo cross World Championships alongside André Dufraisse and Renato Longo - Erik de Vlaeminck is first with seven (but Marianne's only 24 - she has time to top that). 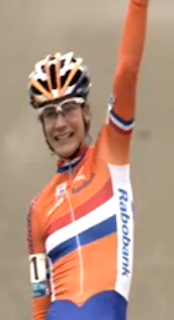 Daphny Van Den Brand is noticeably a better rider on this parcours, looking far more at home on sand than Vos though she can't match her for power; her technical skill allowed her to take a very well-deserved second place 37 seconds down. Sanne Cant also rode well, despite falling on a corner,  and crossed the line just a second after Van Den Brand.

Britain's Helen Wyman says she's been working on improving her starts and the fruits of her labours were very much evident today - she was fastest away from the start line and led into the first corner before being caught by the mighty Dutch and Belgians at the first dune. An unpleasant-looking crash later in the race sent her face-first over the handlebars, but she was back onboard and making up for lost time within seconds; unscathed but for a mouthful of sand. Unfortunately, she couldn't quite take the top ten finish that British fans were anticipating - luckily, Nikki Harris was there to take responsibility and finished a very impressive 6th, while Wyman took 13th..

The sight of Caroline Mani and Sophie de Boer, both initially feared to have sustained broken bones after a crash in the early part of last week's final World Cup round at Hoogerheide, will have been a welcome one for all fans of the sport regardless of their nationality. However, this race was not without upset - in a post-race interview, a UCI official caused controversy and disbelief by asking Vos if she felt that she was "killing the sport" by winning too many races: a question that many fans have declared insensitive out of a very reasonable belief that she should be allowed to celebrate her achievement.

The question was also stupid. Did Eddy Merckx kill cycling? Did Sean Kelly kill Paris-Nice? Did Lance kill the Tour? Of course not - each of them, through their excellence, brought new fans. Each, through their dominance, forced other riders to improve their own performances in order to match them - and men's cycling benefited. Now Vos is doing the same for her sport; and with the likes of Pat McQuaid claiming after the World Road Race Championship that women's cycling is insufficiently developed for female riders to deserve equal pay to their male counterparts, Vos' reign can only be a good thing - just as Beryl Burton was good for women's time trial racing in Britain. Helen Wyman summed things up perfectly last week when she said, "Despite missing two rounds, [she] has shown that she’s pretty much the standard setter for us all and we all need to raise our games."

Bring it on, Marianne. By winning so much, you're breathing new life into women' cycling. The sport needs you - and long may your reign continue. 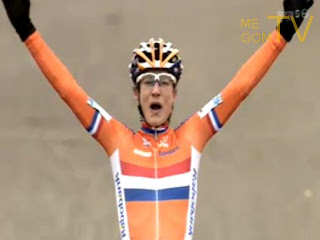