Compton conquers Koksijde - again
For many fans it's the best round of the World Cyclo Cross Cup, simply because the sand dunes on which it's raced make it so very different to the usual mud and slippery wet grass, so while the weather in Flanders is completely unpredictable at this time of year (and at any other time of year, for that matter, though if you bet "rain" you'll generally get good odds) Koksijde is always guaranteed to get huge crowds. Which is good, because it means a huge number of people got to see a superb victory by Katie Compton.

Compton had won here three times before (2008, 2010, 2012) and, with Marianne Vos (who won in 2009) taking her customary end-of-road-racing-season break, was the easy favourite and started the race with 110 points in the rankings, but if you've ever tried to ride a bike in sand, you'll know it's not at all an easy thing to do and requires constant concentration - fail to get a turn just right and you're pitched headfirst into the terrain and even if you have the bike handling skills of a CX god, there's always the possibility that your tyres will keep sinking in, sucking every scrap of strength out of your legs before you can even finish the first lap. Compton dealt with it using a simple but highly effective tactic of running where others tried to ride and managed to beat her nearest rival by a huge margin of 1'08".

British rider Nikki Harris was just 15 points behind, causing many to wonder if she'd go all out for a win today - she certainly had a good go and for a time looked the strongest of the group of six that chased the American, but once the race neared its end it was clear she'd given too much to challenge: it was Sanne Cant who powered away from the group, presumably well aware that she wasn't going to catch Compton but going after as glorious a second as she could take. Thousands of adoring fans cheering you on does more for a rider's performance than the contents of Willy Voet's glovebox, which meant that Cant - who isn't quite a local, being from Ekeren around 150km away in Antwerp, but is undoubtedly a Flemish national hero - was also expected to do well (she's well-known for her ability on sand, too); she may have been outclassed by the victor, but she'll be happy to have finished 14" ahead of Harris.


Photo of the Week
Been a while since I last did one of these (sadly, the pressures of life require me to occasionally suspend my otherwise constant monitoring of Twitter in favour of, like, working and stuff), but "cyclist and wannabe photographer/designer" Jon Baines' shot of Gabby Durrin battling the strength-sucking sands of Koksijde deserves to make it into the eyeballs of as many people as possible. Gabby finished 13th at 47'39" (which she wasn't too pleased with, but just finishing on a parcours like Koksijde is an achievement); Jon says this is the only picture he took of the race using his mobile phone instead of his camera - if it's any indication of how good those will be, I think it's safe to say he's a "gonnabe" rather than a "wannabe!" 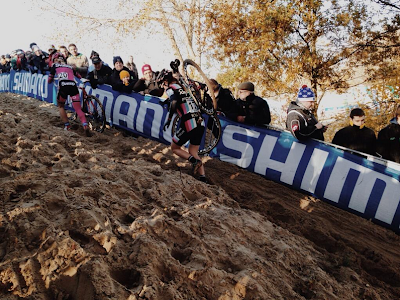 Koksijde by Jon Baines
(used with the kind permission of the photographer; please do not reuse with approval from him)

Wyman grabs glory at Gieten... with video!
European cyclo cross is looking rather like a battle between three riders at present with the Brits Helen Wyman and Nikki Harris and Belgian Sanne Cant dividing the spoils between them during the absence of Marianne Vos (who takes a short break from competition after the road season) and Katie Compton (who has been busy at home in the USA, but flew in to win Koksijde this week - see above): Harris won at Hamme-Zogge, Cant won Jaarmarktcross the following day, at Hasselt the next week then Gavere a day after that and now Wyman, who recently successfully defended her European CX title, won at Gieten on the 24th.

Wyman used her usual tactic of taking the lead in the first lap but was not, for a change, fastest off the line - Reza Hormes-Ravenstijn literally catapulted herself onto the parcours and had the advantage for a short time before Cant took over, then Wyman powered into the lead and remained out in front for the remainder of the race, eventually coming in 16" ahead of Cant, who was five seconds ahead of 20-year-old Sabrina Stultiens, who fought her all the way in an attempt to grab second place but finally had to concede to the Belgian's greater experience on the tricky sandy parts of the track - but third when riding against athletes of Wyman and Cant's calibre is not a bad result at all for the Dutch rider, especially considering her recent knee problems.


Opinions sought on Otley Sportive
Organisers of the Otley Sportive say they want to "shape the event to be specific to women, provide value for money, encourage individuals into cycling, and benefit our community." To do that, they need to know how much riders would be willing to pay, what they'd like for their money, whether they'd wish to pay extra for a jersey and a few more things. You can help by sharing your opinions here.

Boels confirms commitment
If only every company was like Boels (well, shared its desire to get involved in women's cycling, anyway - you wouldn't want all companies to be exactly like the plant machinery hire firm, because sometimes you want to buy bikes, cakes, fish, duvets and, like, stuff, rather than hire plant machinery), which has just confirmed its outstanding commitment to women's cycling by signing new contracts in which it agrees to sponsor the Holland Hills Classic and the Holland Ladies' Tour until 2016. Boels also sponsors the successful Boels-Dolmans racing team (which also has secure backing until 2016) and provides money to a number of other women's cycling events.