Some cycling fans say that team time trials are boring, but if you enjoy seeing a highly-trained squad of riders working closely together as a cohesive unit a race against the clock is one of the most thrilling, spectacular sights that the sport has to offer (personally, I think TTTs are great).

If you want to see a really highly-trained squad working as precisely and efficiently as the inner mechanisms of the sort of Swiss watch that the likes of you and I will never own unless we team up and rob Audemars Piguet (which is where all the football team-owning Russian gangst... I mean, businessmen get their watches), then Specialized-Lululemon can be relied upon to deliver the goods every time - while Orica-AIS, Rabobank-Liv/Giant and several others know what they're doing, none of them can hold a light to Lululemon on a good day. Which is probably why they've now won the Open de Suède Vårgårda three years running - once as HTC-Highroad in 2010 and every since under their current name.

The team, consisting of Lisa Brennauer, Carmen Small, Lauren Rowney, Evelyn Stevens, Trixi Worrack and Ellen van Dijk, hared around the hilly 43km to finish in 53'59", beating closest rivals Rabobank by 38". The team make-up is noteworthy because the same riders will be representing Lululemon in the World Championships.

Marianne Vos, by her own admission, doesn't excel in time trials. However, with the help of her team mates Annemiek van Vleuten, Roxane Knetemann, Thalita de Jong, Pauline Ferrand Prevot and Lucinda Brand, she got the result she needed - their second place served to strengthen her overall lead in the World Cup, extending her lead by five points, from 249 to Emma Johansson's 177 after the Tour of Chongming Island to 279 to 202. Johansson's team, Orica-AIS, might have fared better had it not been for Loes Gunnewijk's extremely unfortunate puncture within 10km of the line.

Vos might not be the best rider in a time trial, but she's widely acknowledged as the the best in the world at mass-start road racing and was always a favourite for the Vårgårda World Cup Road Race, which took place two days after the time trial and consisted of eleven laps of a circuit that followed the latter part of the TTT parcours but omitted the journey out to Herrljunga and back, but after a season in which she has ridden mountain bike as well as road and apparently felt the pressure of doing so, she wasn't quite so much the favourite as would usually be the case and the fact that she was undergoing treatment for chronic backpain just a week ago also helped convince many that Emma Johansson (Orica-AIS), who is perhaps Vos' strongest rival these days, was going to take the honours - which the Swedish fans would have welcomed, since although Emma rides for an Australian team she was born in the Swedish town Sollefteå. When the day turned out wet and windy, though, it was obvious that Vos' supreme bike-handling skills were going to make her a force to be reckoned with even if she hadn't regained her typical form.

Competition was high right from the start with numerous attacks despite the weather. Trixi Worrack (Specialised-Lululemon) especially impressed with a solo break that lasted for an admirable 15km and, later,  Rabo's Roxane Knetemann worked with Orica's Loes Gunnewijk in a two-strong break that left the next group trailing by a minute and a half. Former elite football player Cecilie Gotaas Johnson (Hitec-UCK) tried to bridge and very nearly did so without assistance but the group behind her stepped up its efforts and caught her before swamping Knetemann and Gunnewijk, forming a new group that led the peloton by 3' with 35km of the race still to go. Gradually, as domestiques who'd given all they could to support their leaders dropped away and returned to the pack, the lead group began to diminish in size and by the 25km to go point it had shrunk down to serious contenders. With the weather worsening, it looked like there'd be no further attacks and the group rode the next 20km all together.

Then, apparent disaster for Vos: she punctured near that start of the final lap, and right at a point when the Rabo team car was too far back to attend. Choosing not to rely on the neutral support vehicle, she elected to continue - which will have meant she needed to produce more power in order to keep up to speed as her tyre softened and drag increased. Finally, the car got to her; once the mechanic had switched wheels she gave a fine demonstration of just what she can do by chasing down and rejoining the leaders in virtually no time at all, then got herself to the head of the group so as to be in perfect position ready for the final corner - and then, once the road straightened out, she started her sprint. That she could overpower Johansson and the lightning-quick young sprinter Amy Pieters (Argos-Shimano) with just enough time to raise her arms in celebration is testament to the fact that it'll take a lot more than a bad back to keep Vos from victory.

Following her win, Vos' advantage in the World Cup rankings rises from 72 to 102, 354 points to Johansson's 252 - with only 75 points on offer to the winner of the World Cup's one remaining round, Vos is therefore now guaranteed a fifth Cup. Meanwhile, Specialized-Lululemon's Ellen van Dijk (who equaled Vos' time to take fourth) is in third place overall and trails Johansson by only 28 points; competition for second place therefore remains open and we can expect an epic final battle between Orica and Lululemon at the GP de Plouay. No other riders remain in contention.

Vos underwent treatment for chronic back pain a short while ago and the decision was taken as a precautionary measure to ensure she's fully recovered in time for the upcoming World Championships: "It's a tough season, partly due to the addition of mountain biking to her calendar" explains manager Koos Moerenhout. "We've just got back from Sweden, this week we have the Trophee d'Or, a French stage race; then the classic GP de Plouay and two days after that it's the Tour of Tuscany - her back is well now, but it could all prove to be too much and we need to build up carefully."

At the Worlds, Vos will seek to defend the title she won last year are several unsuccessful attempts. However, as the Ladies Tour is considered to be one of her home nation's most important races and she's won it for the last four years consecutively, the decision to miss it this year cannot have been an easy one to take.

Martine Bras retires
Following an incredible 24 years in the sport, Marine Bras has announced her immediate retirement. Bras, who has ridden for Boels-Dolmans in 2013, had indicated her intention to retire at the end of the season but opted instead to retire now.

Schoonrewoerd-born Martine started cycling in 1988, began her professional career with The Greenery ten years later and has been at cycling's top level ever since. Among many highlights were the bronze medal she won at the National Road Race Championships, third place in the Points Competition of the 2009 Tour of Qatar, Stage 2 victory at the 2010 Holland Ladies Tour, Stage 3 victory in the 2011 Tour en Limousin and fourth in the 2012 Omloop Het Nieuwsblad.

However, in 2012, she suffered a serious crash, hitting her head hard; thereafter she suffered frequent headaches and a loss of confidence: "I was afraid of crashing; whenever I head brakes, it struck terror into my heart," she explained to cyclingonline.nl.

"I am proud of what I have achieved and experienced in this sport," she adds, "now it's time for another life." In October, she will marry; Janneke Vos (with whom she rode in her first year with The Greenery), Giorgia Bronzini, Annemiek van Vleuten and numerous other friends from the world of cycling will attend.

Annie Simpson's laptop stolen
If you live in West Yorkshire and anyone offers you a cheap laptop, don't be tempted and get on the phone to the police by phoning 101 - there's a chance that it belongs to 2012 Johnson HealthTech Series winner Annie Simpson. The computer, which was stolen from her car, isn't worth much but it contains a dissertation and four years of coursework.

Shorts
Trott does not endorse Women's TdF petition
"I think we should slowly build it in and not just go 'bam' with three weeks over the same course and same length of time as the men's," the Olympian told The Independent.

Lisa Jacobs is first ever Australian CX Champ
...but will continue to race only for fun, she says. More at Cycling Weekly.

Interesting Links
How much does it really cost to run a women's team? (Cycling Weekly)
Breaking the Paradox: Womens Racing (Spokeydokeyblog)
Top skier proves herself as a cyclist, too (Cape Breton Post)

Photo(s) of the Week

"Sorry not great quality," says World Road Race Champion Marianne Vos, who took it. The quality doesn't matter: it's the way that it depicts the friendliness between rival teams, which for me is one of the most likable aspects of women's cycling, that matters. (With very special thanks to Marianne Vos)

While Marianne's photo was a sure-fire Photo of the Week the moment I saw it, there was no way I could leave out Velofocus' picture of a little message for the UCI, spotted at the Open de Suède Vårgårda... 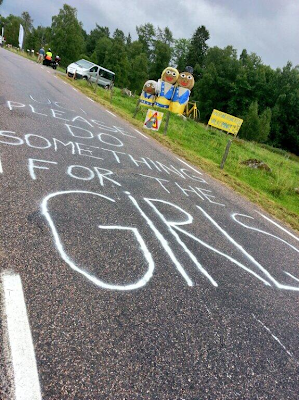