Inaugurated in 1998, this is a race that has been known by several names. Originally, it was the Holland Ladies Tour and remained so for the first 13 years, but a series of new sponsors has seen name changes every year since: in 2011 it was the Profile Ladies Tour, in 2012 the Brainwash Ladies Tour and now in 2013 it's the Boels Rental Ladies Tour.

Along with Lotto and Belisol (whose Belgium Tour took place late last month), Boels is a name that you'll see again and again in women's cycling: in addition to sponsoring a team (Boels-Dolmans), the DIY and plant machinery company has thrown its full weight into supporting the sport - in addition to the team and this race, it also sponsors the Boels Rental Hills Classic and the Ronde van Drenthe. Why? Well, they've obviously found that women's cycling offers sufficient returns to get approval from the bean counters, but it seems likely that some of the people at the top of the firm must be fans. So, if you happen to live near one of Boels' 300 outlets and find yourself needing to rent some DIY equipment or plant machinery, give them a call - and know that some of the money you pay them will go towards supporting and developing the sport you love.

The Ladies Tour has always been a very popular race that attracts the top riders in the world, as well as large numbers of fans. Oh - and make the most of this race. The end of the season is approaching fast.

Previous Winners
Elsbeth van Rooy-Vink, better known as a mountain biker won the first edition, then two more Dutch riders - Leontien van Moorsel and Mirjam Melchers - won in 1999 and 2000. There would be no further Dutch victories until 2009, when Marianne Vos won; she has won it every year since. However, despite having been favourite this year, she has decided to miss the race after receiving treatment for chronic back pain so that she'll have ideal form to defend her World Champion title later in the month. 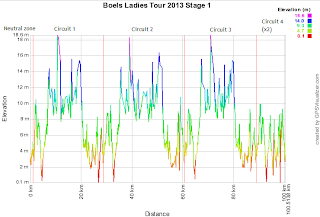 At first glance, Stage 1 looks as though it was designed to give the riders a nice and easy start so they could gradually get into the competitive spirit. If you've followed professional cycling for any length of time, you'll know that sort of thing never happens - look more closely at the parcours and, while there are no big climbs (hey, this is the Netherlands), there are several harsh cobbled sections that hurt everyone (and can end your race if you crash, which is all too easy to do on cobbles). Being located along narrow sections of road, these cobbled sections encourage breakaways because riders riding solo or in small groups stay clear of congestion and the majority of crashes (and have more room to avoid any that might take place in the break) whereas those trailing in the main group can topple like dominoes at any moment. So, expect a tough day of very technical racing.

The toughest section of all is the short Kampweg/Kerkpad/Brink stretch in Norg. Though less than 0.4km in length, the first 150m is extremely narrow and extremely rough. The section is ridden three times but, as there are still 22km to be raced after the final visit, it's unlikely to prove decisive; however, it's sufficiently technical, especially in the wet, that a few riders may find their race ends here.

The start of Stage 2 is going to feel distinctly familiar to some of the riders - they set off from the marketplace in Coevorden, just as they did back in March at the Novilon Euregio Cup. Then, they had 141km and an ascent of the VAMberg, a turfed-over rubbish dump with a maximum gradient of 16%, ahead of them; today, they'll only cover 32.2km and there are no hills to speak of (the bridge over the Stieltjeskanaal is the most challenging of the very small climbs along the way), but because it's a team time trial they'll be riding at full speed all the way.

The main issue along the parcours is the narrowness of some of the roads: while it'll be easier to negotiate them as individual teams rather than as a peloton, some stretches offer space sufficiently limited as to lead to difficulties when riders try to swap position at the front, and those who have spent the most time practicing their change-overs will benefit from this. Otherwise, Stage 2 ought to be a classic example of a team time trial, where the best tactic is quite simply to go as fast as possible. 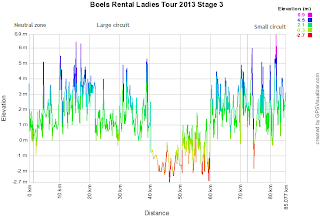 With its flat terrain (the greatest deviation between two points anywhere along the route is less than 10m) and lack of tight corners, Stage 3 looks easy enough at first glance. However, the nature of the competition will be decided by the wind: if it's a still day, expect a fast race with the peloton sailing through at high speed preventing breaks as slower riders drop off the back; if it's windy, expect the peloton to be broken up into numerous sub-groups with the stronger riders battling the weather and one another at the front and the rest battling for survival at varying distances back along the road.

One feature that might prove to have a major effect on the outcome is the railway crossings and swingbridges - the UCI rules state that, should a break reach such an obstruction and be held up, they will be given a time advantage equal to the advantage they had before stopping; however, if the break gets through and the peloton is held up, the time that the riders in the peloton have to wait will be added to their overall times. This can make the difference between a break succeeding or failing, and has led in the past to unexpected victories.

Once again, the wind may be a deciding factor today - especially on the long, straight Tolsteeg-Wijngardsesteeg-Wijngardseweg and Abbekesdoel-Oosteinde-Noordzeijde-Dorpstraat-Westeinde sections, where powerful cross- or headwinds would permit a squad of evenly-matched riders to mount a team time trial-style assault on their rivals by working closely together and maintaining the maxium speed possible, thus gaining a big advantage over weaker teams.

It's another very flat stage: the highest point along the parcours, roughly halfway through the neutral zone, is just 4.8m above sea level; the lowest is 5.1, below sea level and comes around 9km later - there are many little dips and ramps all the way to the finish, but none of them are big enough to play a part in determining the stage winner.

Marianne Vos, as already mentioned, isn't taking part in the Tour this year so that she can give her back a chance to recover fully in time for the World Championships - but there's a good chance she'll put in an appearance at some point today, because the route passes within a kilometre of her home village Meeuwen. Some of the roads featured in the second and third parts of the stage (one 52.2km loop and four 11.4km laps) will be familiar to the riders and fans from May's Omloop vanAalburg - in fact, the 11.4km circuit is identical to the finishing circuit that was completed three times in the Omloop.

As was the case in the Omloop (and the Rabobank 7-Dorpenomloop van Aalburg, which also takes place in the area), wind can be a deciding factor in this race - the terrain is pancake flat, permitting the wind to howl in from the North Sea, and there are few hedges or trees to impede it.

Being so flat and with a long, straight run to the finish, it seems highly likely that the race will finish with a bunch sprint today. How many riders are in that sprint - a few, or all of them - depends on what happens on the long sections on very narrow roads, especially during the 52.2km circuit: the combined length of the four final laps is 45.6km, offering plenty of time for riders who got stuck near the back on the narrow stretches earlier on to get to the front of the peloton, but some of those stretches are so narrow that a small,  strong break could potentially flee the pack at a point where it's impossible for chasers to get up to the front and begin pursuit. If so, the peloton will need to make sure it brings them back before it's too late.

Boels may be the main sponsor of this race, but team-sponsoring partner Dolmans Landscaping are involved too - and Stage 6 starts right outside their premises on Pasweg in Bunde. In this stage, the race changes character completely - the pancake-flat polders where the sprinters had it all their own way are no more now that the Tour enters Limburg, home to the highest hills in the Netherlands which, though not very high, are sometimes sufficiently steep to make things difficult for all but the pure climbers. It doesn't matter what the General Classification looks like at the start line, because it could be very, very different by the finish.

The two most daunting are the chalky hill known as Bemelerberg, usually seen from the Krekelenberg during the Amstel Gold Race, and the infamous Cauberg. Starting just as the race arrives at Bemelen, Bemelerberg climbs 39m in 1.26km; the average gradient is therefore 3%, but the maximum of 6% is enough for the pure sprinters to drop behind. Cauberg is something else entirely: its average gradient is 5.8% and its maximum 12%, sufficient to decide races - including the 2012 World Championships, which took place in this region. It's likely that it'll have some effect on the outcome of this race, too, because the riders will be going up it twice in the final 25km - once at 87.5km and then again at 107.4km. Bemelerberg is climbed early in the race at 6.9km, then again at 100.9km. There are numerous smaller climbs, some with similarly steep sections, along the way. 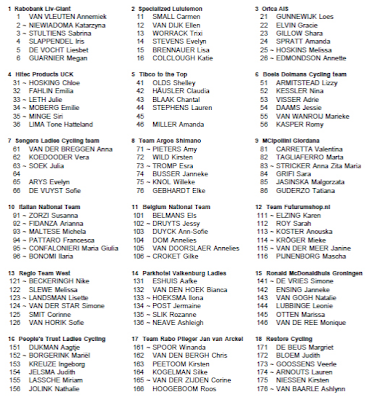