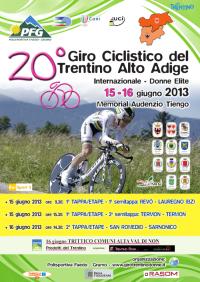 Also known as the Giro del Trentino Femminile, the Giro del Trentino Alto Adige-Südtirol is now in its 20th edition and is an event that has grown to become perhaps Italy's most popular women's race after the Giro Donne (renamed the Giro Rosa this year) for which, with a good selection of steep climbs along the parcours, it forms important preparation for the riders (the Italian National Championships take place in between the two races, making the race doubly important to the Italian riders - expect teams to be sending any riders they have who'll be in the Championships).

However, its been won by an Italian rider only once in the last decade - Fabiana Luperini, who also won in 1995, 1996, 1999 and 2002, took the honours for a record fifth time in 2008. Luisa Tamanini, another Italian, won in 2003; German Tina Liebig won in 2004; the Russian Svetlana Bubnenkova won in 2005 and 2006; Lithuania's Edita Pucinskaite dominated by winning both stages and overall in 2007; Britain got its first win when Welsh Nicole Cooke won in 2008, then British riders dominated in 2009 when Emma Pooley won the first stage and Cooke won the second and overall in 2010; Judith Arndt from Germany won in 2011 and the Danish-born New Zealander Linda Villumsen won in 2012. (Incidentally, Luperini also came third in the first edition back in 1994 and second in 1997, 1998, 2000, 2001 and 2007. She's still racing to this day, for the Faren-Let's Go Finland team, but isn't taking part in this event - or she's not on the roster, anyway: what start lists say and what actually happens in women's races are two very different things.)

The most notable difference this year is the addition of a team time trial stage (Stage 1). In 2012, there was a 5km individual time trial, won by Villumsen, but in the years prior to that the race had consisted entirely of mass-start road races. The race has also grown in length when compared to 2012 with 204.4km compared to 166.8km.

View Trentino2013St1 in a larger map

Now here's something you don't see everyday - a team time trial that's uphill from start to finish. Hilly time trials and even time trials with serious climbs along the route are not unknown, but I can't recall ever seeing one that climbed in virtually every metre and it's something that will have the teams' directeurs sportif pondering exactly how to tackle the stage: since a team's time is determined according to the time recorded by the third rider over the line, they'll have to carefully work out who'll be pulling at the front and who will be most likely to have the strength to keep up at the end. That might make this prime territory for Specialized-Lululemon to find an early advantage prior to the mass-start stages beginning tomorrow - the team is widely-known for coherency and clever tactics under DS Ronny Lauke.

There are a few potentially hazardous points along the way. The first is the pair of hairpins as the SP42 joins the SP28 which, being one of the main routes into Revo, is regularly used by delivery trucks and as such may be prone to slippery diesel spillages; the same is true 2.05km further on, still on the SP28, where there is a lumberyard on the right of the road.


Starting on the slopes of a mountain at Termon with excellent views across the valley to the high mountains on the left, Stage 1a takes place in the afternoon of June the 15th after the team time trial. The initial 2km don't descend particularly steeply, but since climbers often lack the body weight they need to be able to maintain a comfortable degree of control over their bikes when descending it's likely that a large number of riders who prefer other sorts of terrain will make use of the much steeper 1.5km that follow to get ahead, then attempt to lengthen the gap and, if they can, stay ahead for the remainder of the race so as to arrive at the Category 2 climb in the final 9km with a healthy advantage. However, inexperienced riders will need to take very great care, especially if the weather is bad - and if a large number of riders attempt to escape together, a small mistake by one rider could very easily turn into enormous pile-up carnage.

The parcours is flat from 10 to 70km. After traveling as far south as Zambana, the riders turn north-east and continue to San Michele All'adige and then, a few kilometres ahead, begin a circuit passing through Faedo, Salorno and Rovere' della Luna, sitting in the narrow Aldige valley and enjoying some of the most beautiful natural scenery anywhere in Italy. Two laps will be completed, after which the riders will take the SS43 leading back to Mezzolombardo and then reverse the route they took earlier to return to Cressino.

Instead of turning west to go straight to Termon, they now continue north along the SP73/SP43 to Denno where they begin the stage's GPM climb, ascending 100m in around 9km over the first section of the climb and then a far stiffer 300m in 6.1km, average gradient 5%. There are two hairpins on the way to Denno (which is itself 60m higher than Mezzolombardo) and three more after it as the race progresses to Cunevo; as ever, riders who are pushed towards the tightest part of the bend will experience a much higher gradient than those further from the kerb. The climb ends at the Piazza SS Redentore in Cunevo, 86.5km from the start; there is then a short descent and short climb over the remaining 2.1km to the finish line, located at the same point as the start in Termon.

Stage 2 (Sanzeno - Sarnonico, 103.8km)
Some Grand Tour fans, strange as it may seem, are not cycling fans - they watch the Tour de France, the Giro d'Italia and the Vuelta a Espana not in order to see the teams and riders battling to become the victors of the greatest races in cycling (the greatest in sport, some say), but for the incredible scenery that they pass through. Castles and cathedrals are as popular as the beautiful mountains, so much so that there's even a name for the arty helicopter shots of them: chateauporn. We don't get televised coverage (even without helicopters) of the Giro del Trentino (because it's a women's race and the world hasn't yet realised how great women's cycling is), but if you're fortunate enough to be able to go along and watch it and fancy some red hot architecture action, you absolutely must see Stage 2 set off from the Santuario di San Romedio - a complex of five churches, dating from 1000 to 1918, set among breathtaking mountains and joined together by a flight of steps.

Sanzeno, 3km from the Santuario and where the racing gets underway, is not without its charms either; though tiny - it has only 900 inhabitants - it's been a community since before Roman times and has many interesting old houses, a basilica and an ancient church.

View GdT2013Stage2 in a larger map

Once the neutralised zone ends, the riders begin heading north-east via Casez and Dambel on the SP24, then pass through dense forest and, shortly before emerging by a golf club, enter the circuit that will form the remainder of the race. They bypass Seio before arriving at Sarnonico, site of the 2009 National Junior Championships, continuing on the SP24 into the town, crossing the finish line to begin the first of six 15.3km laps.

The Category 2 climb also begins at the finish line with the summit located 0.6km away once the race turns south; the ascent is only 33m in total but, gained in such a short distance, the average gradient is 5.5% - and as the altimetry profile shows, it becomes considerably steeper in the final part. The riders then progress to Cavareno and onward to Romeno, then through Salter and via two hairpins to Magolo where they turn north to rejoin the SS43 and return to Romeno. Now they turn north-west and once again take the SP24 to get back to Sarnonico, taking the same route back to the finish line to begin a new lap.

It's likely that a break will form early on in the stage, very probably as soon as the neutral zone ends. Whether it gets anywhere remains to be seen: a group of strong riders could get away, increase their advantage on the climbs (the GPM climb and the one that comes before it) and then work together to preserve and potentially even widen the gap all the way to the end. However, this is a stage that gradually grinds away at the riders' energy, draining them gradually with each lap of the circuit rather than hits them with one big all-or-nothing hill or sprint: a weaker break's reserves will begin to be seriously depleted sooner or later and a strong break will be considerably weakened as the race goes on.

Please note: although great care has been taken when producing these stage maps, they should be considered to be for illustrative purposes only. If in any doubt it should be assumed that official maps and directions provided by the race organisers are correct.

Following the Race
The Giro has an official Twitter account via which organisers provide regular updates on race day, as well as various interesting snippets of information on the event, the riders and Italian cycling in general throughout the rest of the year.