Last year, as tends to be the case with every race she enters, Marianne Vos (Rabobank) was favourite to win La Flèche Wallonne Féminine and, had she have done so, she'd have set a new record as the only rider to have won five times. The World Champion is already the only rider to have won three consecutive editions and the only rider to have won four editions in total. (For comparison, the record holders in the men's race - Marcel Kint, Eddy Merckx, Moreno Argentin and Davide Rebellin won a total of three editions each. Only one rider, Welsh World Champion Nicole Cooke, comes close to Vos' achievement with three wins and two second places, while Italian Fabiana Luperini won three including the first edition in 1998).

It was not to be. Vos - who is as clever a rider as she is strong - made a rare mistake, expending too much energy in chasing down a break before launching a savage attack on the Mur de Huy, the final climb, allowing Evelyn Stevens (Specialized-Lululemon) to power past her with only metres left and become the first American winner in the history of the race.

Marianne is well-known for being one of the nicest riders in cycling, as well as the most successful of her generation, but she freely admits that she doesn't like to lose. This year, many riders were at La Flèche both to collect World Cup points and, if at all possible, prove themselves her equal, and they've had all winter to train hard (while she was busy dominating cyclo cross again, as well as preparing to make her return to mountain biking) in an effort to match her. She'll have known at the start of the season that she wasn't going to have things quite as easy this year as last - but her rivals, now they've had a few years in which to understand just how phenomenally, remarkably, perhaps even uniquely talented Vos actually is, will also have been aware that their efforts simply might not have been enough.

Nothing comes easy in La Flèche, with difficult roads and a series of very difficult climbs, the most difficult of them being the legendary Mur de Huy with its average gradient of 9.3% and one corner reaching 26%. Then there were the five climbs en route to it, ranging from 3.9 to 7.6% average gradient - all of them, like the Mur, climbed twice. This is a race that can't be won, nor even completed, without a good deal of suffering.

The first 50km were livened up by numerous attempts to break away, but none succeeded in gaining more than 20" before being caught until a group of eight managed to find 42" on the fourth climb. The first ascent of the Mur broke up the peloton once more, but it reconvened (minus several abandons) on the other side, setting the stage for more attacks courtesy of Britain's Katie Colclough (Specialized-Lululemon), Alena Amialiusik (BePink) and Tatiana Guderzo (MCipollini-Giordana), but with so teams out to win, piling the pressure onto their rivals in an attempt to make sure their riders were in the best positions, each attack was swiftly put down and the race was very much undecided until the last ascent.

In the end, it came down to three riders: Hitec Products-UCK's Elisa Longo Borghini who has attained the best form of her career so far this season, Lotto-Belisol's superb climber Ashleigh Moolman, and Vos. Then, when the steepest part of the Mur had taken its toll, the 25-year-old Dutch rider pulled off a characteristic move, finding strength deep down that nobody else could match - when she attacked, Moolman and Longo Borghini could only watch her go and fight one another for second and third. She won with enough time to sit up and cross the line with arms held aloft as she became the only rider, male or female, to have won La Flèche five times. 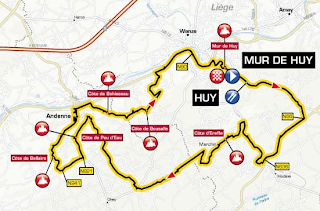 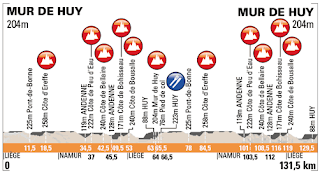