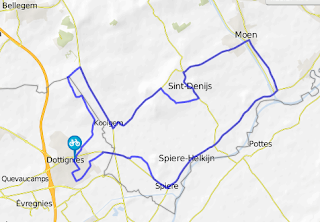 If you'd just spent your Sunday dealing variously with the sort of cobbles that make bits fall off your bike and climbs as steep as 20%, you'd probably want to spend Monday in bed, right? I know I would. But then, I'm not a professional female cyclist, and there's no way I could cope with doing all of that one day and then racing for another 114km less than 24 hours later (nor, for that matter, could I cope with taking part in either race) - but that's precisely what several of the riders taking part in this year's GP de Dottignies did, because it took  place the day after the Ronde van Vlaanderen.

The Race
Using the popular "circuits" format with four laps around a 28.44km course, the race featured three climbs in the first half of each lap. The first of these, Ronceval, began shortly after the start and reached a peak of 48m 3.33km into the race - it's the longest climb on the parcours and as a result isn't especially steep, though the maximum 5.3% gradient will undoubtedly have felt increasingly difficult each time the riders climbed it. GPM points were on offer for the first riders to the top on Laps 2 and 4. The second climb, Kooigembosberg, also reached 48m (peak 9.17km); however, the ascent is far shorter at 1.2km and the gradient, therefore, steeper with a maximum of around 12.2% through the woods just after the junction with Grote Dalestraat. GPM points were awarded on Lap 1. The third climb, Sint-Denijsberg, is lower with a peak of 37m 12.05km into the parcours; the steepest point is 7.7% and located by the Sint-Denijs church. GPM points were awarded on Lap 3.

In addition to the climbs, there were two cobbled sections. The first is 300m in length and located 7.31km into the race on Kooigemstraat immediately after the right-hand turn from Koninklijkestraat; partially covered in tarmac, they didn't look to be particularly challenging but must have hurt bodies made tender by yesterday's rough stuff. The second stretch was longer at 700m and located on Jacquetbosstraat 23.47km from the start; they began at the left-hand turn onto the road and run along the sides of a central tarmac strip, starting rough but becoming smoother to the end of the section.

With the climbs not being especially challenging and completely flat final 3km ending with a straight section of  300m to the finish line after the left-hand turn onto the Rue du Sous-Lieutenant Catoire at Dottignies, this was a race that looked on paper to be suited to the sprinters and most likely to end with a bunch sprint - but it didn't. A group numbering thirteen riders (five of them from Rabobank) got away from the pack soon after the first lap started, but never managed to increase its advantage to much more than a minute. However, a combination of the group's strength and lack of concerted efforts to bring them back once the peloton split apart into several small groupsin strong crosswinds meant that a minute was plenty long enough.

The lead group members started attacking one another with some 20km still to go and, before long, were reduced in number with only Sanne van Paassen, Roxane Knetemann and Iris Slappendel (Rabobank), Vera Koedooder (Sengers), Laura Trott (Wiggle-Honda), Alena Amialyusik (BePink), Esther Fennel (Koga) and Katarzyna Pawlowska (GSD-Gestion) hanging on as the pace stepped up. Dutch Madison Champion (shared with Marianne Vos) Knetemann was the first to attempt a break and successfully created a small gap before Koedooder caught her, then the group swept them up again. Slappendel went next, but was brought back even more rapidly.

Finally, Koedooder launched her own attack. Slappendel tried to catch her, but Koedooder simply accelerated; Slappendel's response - more acceleration - caused the pair to get faster and faster, but finally it was Koedooder who proved to have the greater reserves, staying 6" ahead of her persuer and 48" ahead of the next rider at the line to take a well-fought and deserved second victory of the season.

Meanwhile, back down the road, what was left of the lead group ensured that fans who'd been hoping for a bunch sprint were not disappointed; van Paassen got her position on the podium after a thrilling high-speed battle with the five others.