Bronzini aiming for a third rainbow 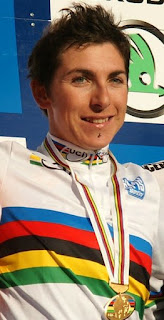 "It's a tough route, far more selective than in the last two years," admits defending World Champion Giorgia Bronzini, "but I've trained hard for it and I want the rainbow jersey."

The Italian ace sprinter, who turned 29 in August, is expecting stiff competition however and knows that she might even end up surrendering her chances to someone from her own team: "If it's a really hard race and the peloton is split apart, it might be down to Elisa Longo-Borghini or Noemi Cantele to try to get away to the finish line - but I'll try to stay as close as possible, and we'll just have to see if it ends with a sprint."

Marianne Vos won the Worlds in 2006 and tried unsuccessfully to repeat her success ever since; but it's a well known fact that, sooner or later, Marianne Vos wins everything - having come so close last year, the Dutch phenomenon is the favourite for 2012. Bronzini knows this, but refuses to be intimidated: "She was also the favourite the last two years. Which I won," she says.

Polspoel to Sengers
All-rounder Maaike Polspoel will depart Topsport Vlaanderen-Ridley at the end of the season and will move to Sengers. The decision may be linked to being overlooked for the Belgian team going to the World Championships, rather a mysterious decision by the selection committee as the 23-year-old has had some excellent results this year the hilly Limburg parcours seems suited to her.

Kristin Armstrong's Felt bikes stolen
If you should happen to be offered a very nice Felt bike at a price that seems too good to be true, you might want to get in contact with Exergy Twenty12 - there's a reasonable chance that they belong to Kristin Armstrong. The bikes were stolen whilst in transit somewhere between Germany and the USA and could therefore turn up in Europe or North America and the team is offering a reward for information that leads to their recovery. More details here.

The future of women's cycling...?
Stef Wyman, manager of highly successful British women's team Matrix Fitness-Prendas, wrote an article for Cyclismas on how fans can help the sport to develop recently. You can read it here.

Anyone who knows anything about women's cycling knows that Stef knows what he's talking about - he's nurtured the team from day one and enabled it to grow bigger and better every year, despite no doubt going through some tough times when he must have been tempted to give it all up.  But Stef doesn't run his team as a side-project or simply in the hope of putting together an impressive cv for future job applications to big budget men's teams; he does it out of a genuine love for women's cycling. He is, therefore, dreaming of the next step - and he dreams big. What he wants to do, no less, is develop his team into "UK’s primary racing academy for women," no less, thus driving and promoting the sport here and abroad and helping the athletes to get the fair deal that they so fully deserve.

In his article, he suggested that one way to do this might be to have a fan-backed team, ie one in which salaries and team development is funded by commercial sponsors while donations made by fan are put towards promoting the team and other uses agreed between team management and a committee of the fans themselves. The very same night the article was published, the article grew a pair of legs that any pro rider would be proud of - within a day, it started happening.

This could be the future of women's cycling, the way in which the exposure and coverage that the sport needs and isn't getting from elsewhere will be paid for and provided. The women's road race at the Olympics showed that there is a market for women's cycling - with £14,000 raised in only four days, this project might be the turning point from which women's cycling grows into what it has the potential to be. Read more about it at the Matrix-Prendas website.

Unofficial, Unsanctioned Social Media Jersey goes from strength to strength
In the week's second fan power story, the prize fund for the all new UUSMJ - which consists entirely of donations made by fans - now stands at more than $2000; enough to be split into a number of prizes. Since it's considerably more than the total prize fund on offer at many women's races, it now has the potential to make a very real difference to the riders that win it.

Got an idea who you think deserves it? Votes can now be cast at the Unofficial, Unsanctioned Women's UCI Cycling Blog.

The week in pictures
Sengers riders training for the Worlds (@Bartoli84)

Worth a read
The Role of Fans in Women's Cycling (Stef Wyman)
Immersion in the heart of women's cycling (Christophe Edelaine, manager of the Ardeche mixed international team)
Ridley Asteria 1106a review (Triradar)
Posted by john_orbea at 14:19