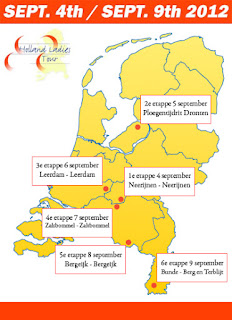 Organisers of the Holland Ladies' Tour - among the most prestigious European women's cycling events now that the Giro Donne is the sole surviving women's Grand Tour - have revealed that they're successfully recruited a new main sponsor.

Chairman Marten de Lange announced at the end of January this year that the race had been temporarily suspended due to financial difficulties. However, around four weeks later he was able to confirm that the race would go ahead after other sponsors agreed to provide more backing, but that it would have to be a more "economical" event. "It would be a shame if this race was to disappear, especially now that it offers such a perfect prelude towards the world championship in Limburg one a week later," he said. "We are still negotiating with a potential sponsor. If that happens, we can make the race as good as previous years - which is what the successful women of Dutch cycling deserve."

The new backer, Brainwash, is a chain of hairdressers that will already be familiar to many fans, having maintained links to women's cycling for some years - it previously sponsored its own Brainwash team before becoming co-sponsor of the Rabobank Women's team. However, company managers had let it be known when the team closed that they remained keen to continue their support and presence in the sport: that they have now extended it is a promising sign that they've found the returns satisfactory. In difficult economic times that have seen numerous races and teams vanish due to financial problems, this goes a long way to encouraging other firms to become involved.

The race, which has been won in the past by such illustrious names as Leontien van Moorsel, Petra Rossner, Kristin Armstrong and new Olympic champion Marianne Vos, is due to take part between the 4th and 9th of September and will now become known as the Brainwash Women's Tour.
Posted by john_orbea at 16:27