Stage 1 preview and weather after the prologue results

Prologue
The Exergy Tour is all over for favourite Kristin Armstrong (Exergy-Twenty12) already after a crash in the peloton left her with a broken collarbone. The 38-year-old, twice World Time Trial Champion and the last down the start ramp, was halfway through a blisteringly fast lap of the 3.2km parcours in Boise, Idaho when her front tyre lost grip, causing her to land hard on her left shoulder.


"We are all absolutely heartbroken for Kristin, but we are ready to rally and do this for her and her hometown." (Tayler Wiles, Exergy-Twenty12)

Ignoring the pain, she was up in seconds and back on her bike to finish the stage; the combination of lost time and reduced speed in the latter half making her eventual 13th place and time of 4'17.88" remarkable. She'll undergo surgery today, during which stabilising pins will be inserted into the bone, and will then begin to concentrate on making a full recovery in time for the Olympics - get well soon Kristin!

Gillian Carleton (Canada) looked to be in with a good chance of winning when she set the bar at 4'9.98", which remained fastest time for 30 minutes until team mate Tara Whitten shaved off 0.34" - which, following Armstrong's misfortune, earned her the victory. Fellow Canadian Clara Hughes (Specialized-Lululemon) took third with 4'10.55", her team once again achieving their now customary domination of the top ten with no fewer than five placings. Nicole Cooke (Faren-Honda), the only British rider in the race, was 61st with 4'38.56". 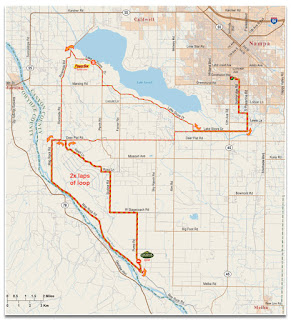 Friday's Stage 1 extends over a 120km parcours starting and ending at the Recreation Centre in Nampa, Idaho. Riders will first head south and west on straight roads, then follow the banks of Lake Lowell for 14.5km before once again turning south. After 8.21km, they arrive at the beginning of a 33.9km loop running along the Snake River before turning north and back to the start of the circuit for a second lap. The stage's "Queen of the Mountains" climb comes at the southern end of the circuit; not a huge one at around 150m, but it's steep. Once done, they start the 23.12km journey back to Nampa by heading east along Deer Flat Road which, were it not for a wide bend and climb in the first 4km, would be perfectly straight and almost entirely flat; then it's flat all the way. It looks, therefore, rather like a sprint finish is on the cards - and Carmen Small is the Les Déesses top pick.

It doesn't look as though the weather will be to many people's tastes - maximum temperatures of around 14C aren't too bad (though a north-north-westerly 16kph wind will make it feel a good 2-3C cooler than that), but rain and thunderstorms look extremely likely.
Posted by john_orbea at 10:58