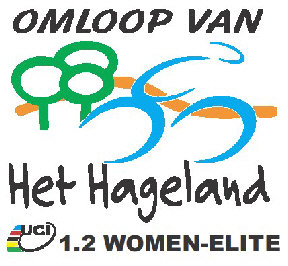 Although we've had a number of events outside Europe (Qatar, Costa Rica, El Salvador) by this point in the year, as far as many fans are concerned the season hasn't really got going until the European - and specifically in the case of women's cycling Belgian, and in the case of Belgian cycling specifically Flemish - season is underway. The Omloop Het Nieuwsblad took place in February, now the Omloop van het Hageland is the second big Flanders race: the racing season has well and truly begun.

The race, now in its fifth edition, consists of one main section of 55.3km and five laps around a 13.4km circuit for a total of 122.3km, offering all the usual features of a Flemish race - tough and narrow roads, knee-busting climbs, bone-and-bike-breaking cobbles and, because it's early March and this is Flanders, potentially horrible weather. Cycling is a cruel and brutal sport; all its cruelty and brutality can be found in the Flemish races, combining to make for spectacular racing.

Last year, Lizzie Armitstead became the first British rider to win when she completed the parcours in 3h17'49", beating Pauline Ferrand-Prévot by 2" and Elisa Longo-Borghini by 4" while the tough Dutch sprinter Kirsten Wild led a group that came in 43" later. No start list has been published at the time of writing but, having gone on to enjoy enormous success throughout last year, we can expect to see Lizzie going for a second victory if she takes part this year.

As is usually the case, there will be three competitions taking place in the race. The first is the General Classification, for which the winner will be awarded €326 and 40 UCI points, second €217 and 30 points, third €164 and 16 points (4th-8th will receive 12, 10, 8, 7 and 3 points respectively) and the next  17 across the line various sums down to €22 for 16th-20th - rather paltry amounts, reflecting the realities of professional women's cycling. There will also be a GPM or hill climbing competition with hill sprints on Kerkstraat in the 55.3km route and on Roeselberg during the first, second, third and fourth laps of the circuit - the first rider to the top receives 5 points, second 3 points and third 1 point; at the end of the race the rider with the most climbing points wins €75, second €50, third €25. Intermediate sprints will be contested at 55.3km as the riders enter the circuit and then at 68.7km, 82.1km and 95.5km as they begin the second, third and fourth laps. The intermediate sprint points system and prizes are the same as the GPM.

The race starts and ends at Tielt, a town of just under 20,000 people that became a German headquarters during the First World War and suffered heavy Allied bombing as a result - almost all of the buildings, many of which look as though they've stood for hundreds of years, had to be rebuilt after the conflict. It is the birthplace of Gianni Meersman, who currently rides for Omega Pharma-Quickstep, and was once the home of the legendary Flandrien (some say the only Flandrien) Briek Schotte.

Kerkstraat, beginning 50.7km into the race (highest point: 57.2km), is a mere 697m in length and has an average gradient of 4%, which doesn't sound difficult - even the maximum 10.5%, for approximately 20m starting 300m from the start of the road, isn't particularly hard compared to the insane gradients of Paterberg and the infamous Koppenberg. However, conditions on the road are extremely tricky - there is ample opportunity for an unfortunate rider to lose significant time here.

It doesn't look like much at the beginning - just a left turn between a grey barn and some modern red-brick houses, leading through some trees toward the church that gives it its name, and despite the cobbles and a low wall on the right during the first hundred metres or so it's straightforward, though too narrow to allow riders to change position much. Then, suddenly, a hazard: on the left, there's a deep, stone-lined ditch running  right along the side of the road for 45m - unless they're near the back of the peloton, any rider who gets in there is going to have a long wait for the mechanic to get through with the spare bike at best and at worst will be out of the race with fractured bones.
The first bend lies 167m from the start of the road - with stone walls either side, all the riders are squeezed tightly together as they attempt to get round and, just to make matters worse, there are steep banks behind the walls meaning that the road is likely to be covered in a slippery layer of mud after rain. Just around the bend the road becomes narrower and steeper; a ditch now runs along the right side and forms another potentially race-ending trap for any rider that runs out of space and rides into it. More banks on both sides mean more slippery cobbles, and the brambles growing on the banks threaten punctures. 47m after the bend the road opens up to the left but becomes even narrower; a short way ahead, where the hedge starts again on the left, the steepest part begins. There's another bend 437m from the start, not as sharp as the first but tighter due to the narrowness of the road and with more banks; then 84m a right bend as the race leaves the trees behind and heads into a final straight 197m past an orchard where any rider that has managed to stay ahead of the pack and find an advantage might - provided the cobbles aren't too wet - be able to step up her speed and extend it before turning left onto the very welcome smooth asphalt of Driesstraat 51.8km from the start of the race. If she can, that rider will then have a good chance of being first through the intermediate sprint at the beginning of the circuit 3.5km away.

Located 7.6km into the circuit, Roeselberg is shorter at 200m and, despite being steeper (the average gradient is 7.5%) would be a far less daunting prospect than Kerkstraat due to the wider and smoother road - if the riders didn't have to climb it five times, of course.

The climb begins from a left turn out of Kriebekestraat; there's a bank on the right for the entire climb (and for 100m after it), but it looks stable and is unlikely to cause slippery conditions unless rain has been exceptionally heavy. As the bank ends, the road becomes Motbroekstraat and there are 4.1km to the beginning of the next lap.

More details nearer to the date