British hope at the Tour of Qatar

Somewhat surprisingly, considering the enormous upsurge in interest in women's cycling in Britain and the number of world-class athletes from England, Scotland, Wales and Northern Ireland making their mark on the cycling scene in recent years, British hopes for a Tour of Qatar victory rest on the shoulders of just one rider - even the British-registered team Wiggle-Honda will compete without a Brit.

However, as that one rider is Lizzie Armitstead, who is currently ranked 17th among Elite Women worldwide by the UCI, there's still a very good chance of a British victory - not least of all because Qatar is made up of the sort of windy, flat stages that usually result in bunch sprints which suit a rider equipped with Armitstead's super-fast sprint abilities (she was, after all, second to Marianne Vos as the 2012 Olympics - and Vos is popularly acclaimed as the greatest rider of her generation), and because she has a strong Boels-Dolmans squad made up of Romy Kasper, Christine Majerus, Katerzyna Pawlowska and Marieke Van Wanroij backing her up.

If the gold General Classification jersey seems out of reach, Armitstead could instead aim for the silver Points competition jersey - a stage win combined with good performances in the intermediate sprints would put her in with a good chance at this. However, with no climbs anywhere in the race, all the teams will be sending the best sprinters they have and she'll face stiff competition for each and every point. 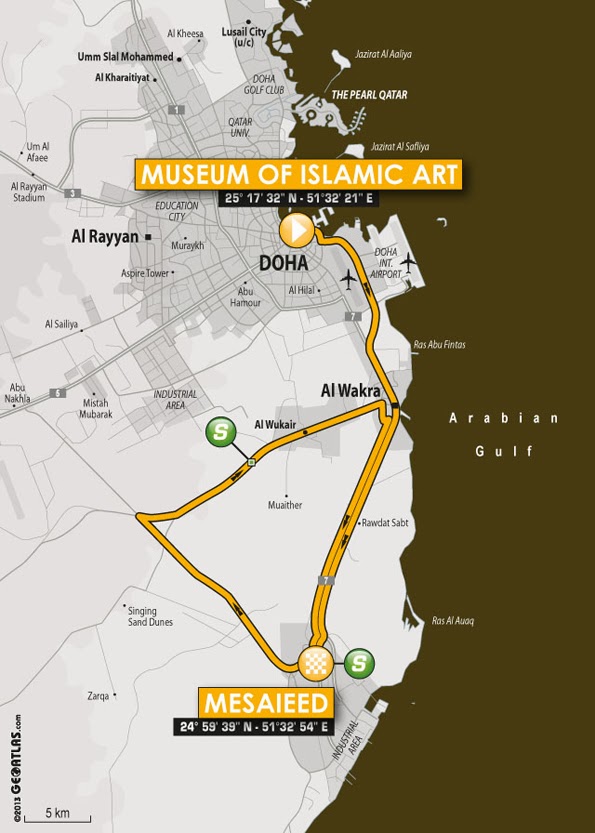 The race covers 388km split into four stages, some of them familiar from previous editions of the Tour.


Stage 1, extending for 97km, is a carbon copy of 2013's Stage 1 which was won by Australian Chloe Hosking of Hitec Products-UCK. Hosking has been one of the finest sprinters in the world for a few years now and has continued to improve; racing for Hitec again this year, she'll be one of Armitstead's strongest rivals for stage victory and the overall General Classification.

The riders will cross the finish line twice, first after 35.5km from the Museum of Islamic Art in Doha and then again at the end of the race 61.5km later. When they do so for the first time they'll enter the first of two intermediate sprints; the second intermediate sprint on the desert road heading east to Al Wakra. 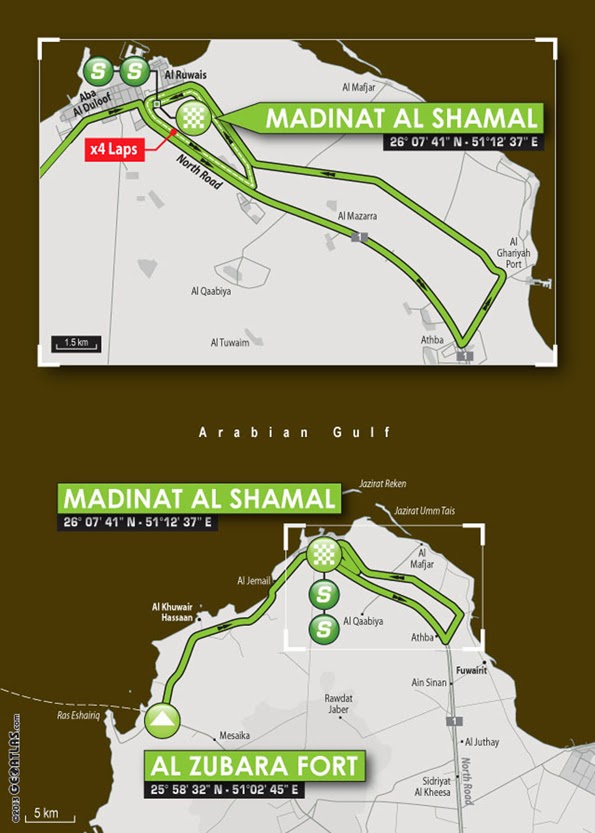 Stage 2 starts at Al Zubara, a ruined city with a fort that looks medieval but in fact dates from 1938. Heading north-east along exposed coastal roads, the riders can expect very powerful crosswinds all the way to their first arrival at Al Ruwais. This may split the peloton, but it's unlikely that we'll see breakaways here as riders will concentrate on forming echelons for shelter.

At Al Ruwais, they'll turn and ride almost all the way across the country to Athba; since they'll now be heading away from the east coast, a strong tail wind could make this a very fast section of the stage and once again prevent breakaways. After a short stretch north to Al Gariyah, they turn west and begin riding back to Al Ruwais, this time battling a headwind. Having crossed the finish line for the first time they'll begin four laps around Madinat Al Shamal with intermediate sprints the second and fourth times they cross the line before finishing on the fifth after 112.3km.

Stage 2 in 2012 started and ended at the same points, but followed a different parcours that led east across the desert rather than north along the coast, making it an entirely different sort of race. Trixi Worrack won that day; she's back leading the Specialized-Lululemon team this year, but with the changes to the route it's impossible to say whether she has more chance at winning than her rivals this year - and since victory is likely to go to a rider able to generate a sprint-winning high wattage after fighting the wind for so much of the way, Armitstead seems to have odds as good as anyone else. 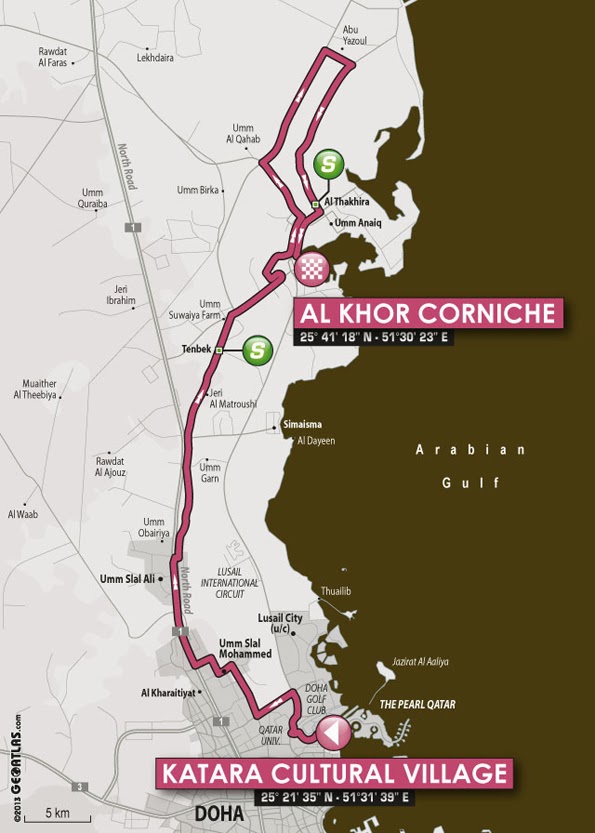 Stage 3 runs for 93.5km from Katara Cultural Village at Doha just a short distance from the famous Pearl to Al Khor Corniches and then north into the desert before returning to Al Khor Corniche - remaining near to the eastern coast, it's likely to subject the riders to crosswinds which may blow in off the sea to the east or straight across the flat landscape from the west.

Once again, there are two intermediate sprints. The first is at Tenbek, 45km into the race and roughly two thirds of the way to Al Khor Corniche, while the second is 44.5km later at Al Thakira, 8.5km from the finish.


Stage 4 will also feel familiar to riders who competed last year, because it's the same as the final stage from 2013 - though it's listed as being 85km instead of 86.5km this time around, for some reason. Then, unusually for Qatar, the wind dropped and completely changed the character if the race, encouraging fierce breakaways and attacks as Hitec fought to get Hosking into a position to take on race leader and eventual victor Kirsten Wild who is back with her Giant-Shimano team this year - and who will be a very powerful opponent to Armitstead and anyone else hoping to win. 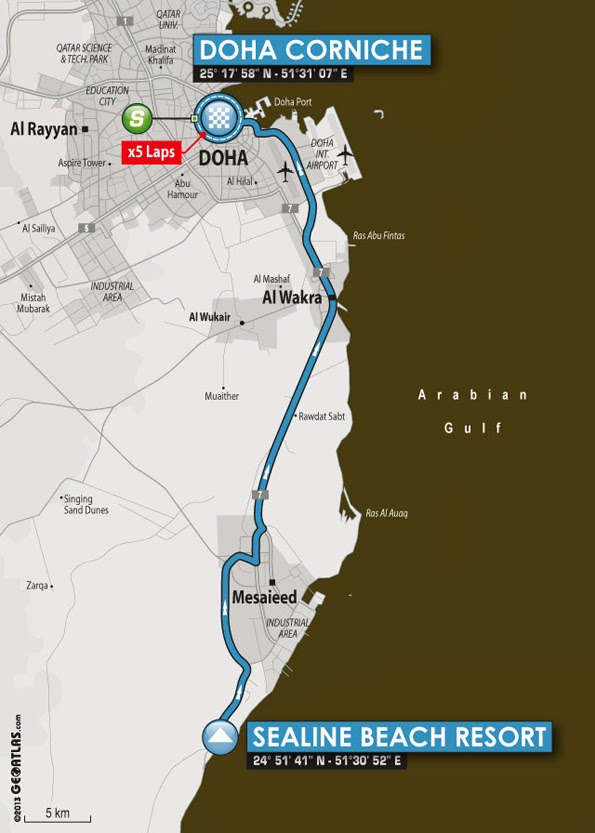 Starting at the Sealine Beach Resort, the parcours heads north via Mesaieed and Al Wakra (site of the first intermediate sprint, 38.5km from the start) to Doha; never venturing more than a few kilometres from the east coast it's likely that the riders will have to contend with crosswinds, unless the weather does something unexpected again. Once at Doha they'll compete five laps of the fast city circuit with the second intermediate sprint at the fourth crossing of the finish line, 11.5km from the end of the race.